The Baker Orange • May 8, 2020 • https://thebakerorange.com/33491/showcase/long-awaited-documentary-the-last-dance-airs/ 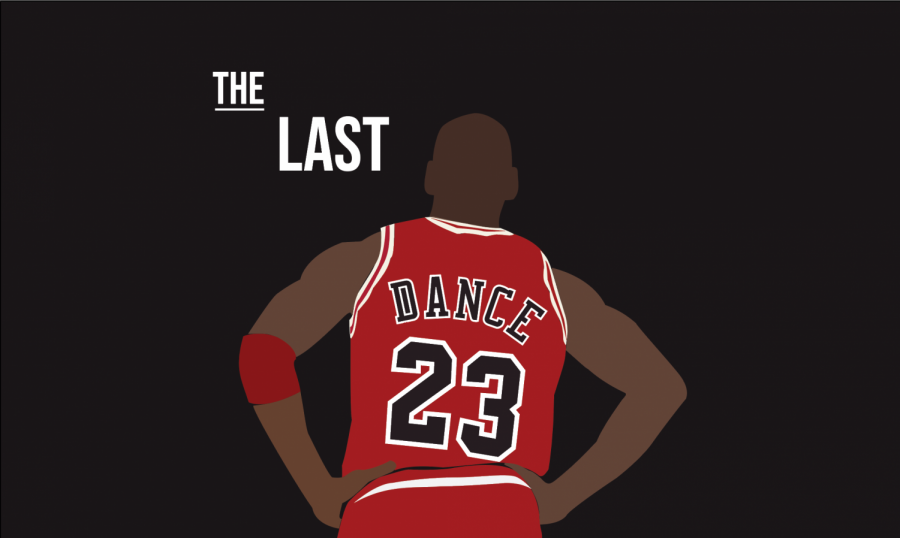 Because of the cancellation of all athletic events due to COVID-19, there is a huge void in the world of live sports. Major events that people look forward to attending and watching on television in the spring and summer time, like March Madness, the NBA Finals and the 2020 Summer Olympics, have been suspended or postponed until further notice. But on April 19, a long awaited documentary began airing on ESPN that captivated both sports fans and non-sports fans and brought fresh energy to quarantined communities around the world.

“The Last Dance” is an ESPN and Netflix documentary surrounding basketball legend, Michael Jordan. The documentary focuses specifically on his final season with the Chicago Bulls before retiring from the NBA for good. The Chicago Bulls allowed a camera crew to follow and film them throughout the entire 1997-1998 year. The documentary series presents never-before-seen footage and up-close interviews with the players, coaches, managers, family members and friends.

ESPN planned to air the 10-part documentary series this June, around the time of the NBA Finals, but due to COVID-19 cancellations, the corporation released it early. There are a total of 10 episodes that are each one hour long. ESPN plans to continue airing two episodes every Sunday for five continuous Sundays.

This comes during a time when sports fans are longing for some type of content to fill the void. “The Last Dance” gives sports fans what they have been craving. By airing new episodes every week, viewers are given that real-time feel that is missing with the loss of live sports.

Senior Michael Barnett is a sports fanatic who was locked in the minute the highly anticipated documentary first aired. Having already done his research on the 90’s Chicago Bulls, Barnett knew the series would live up to his expectations.

“[Jordan] was truly larger than life,” Barnett said. “There may be only two other athletes in sports history that you can compare to him. The two athletes that come to mind are Babe Ruth and Muhammad Ali.”

It seems unheard of that someone who was cut from his high school basketball team one year would end up being known as the greatest basketball player of all time. Nonetheless, that is Jordan’s story. He led the Bulls to six championships

The Chicago Bulls are widely thought of as one of the greatest teams in NBA history due to the dynasty they built during Jordan’s time. Much of their success is accredited to Jordan’s legendary playing style and leadership. Jordan was competitive beginning at a very young age. He did anything and everything to win, which translated into every aspect of his basketball career.

For someone who has maintained that he prefers to stay out of the media to actively participate in the documentary is huge. Viewers get to see how Jordan interacted with the people around him and hear first hand accounts from the man himself today.

Though the main focus is Jordan, the documentary highlights other instrumental players on the team that season, like Dennis Rodman and Scottie Pippen. Rodman was expressed as one of the most controversial, interesting players in the NBA, but he was a stellar rebounder and a power forward. Meanwhile, Pippen was arguably the most overlooked player on the team. His defensive skills were astounding, and he played an important role in the uprise of the Bulls.

“I think Jordan will gain respect and love, but Pippen may be the one that comes out with more acknowledgment,” Barnett said. “Pippen is one of the greatest players in NBA history and he’s been overshadowed by Jordan even though Jordan never won anything without Pippen. I think people will finally realize how great Pippen was and what he meant to the Bulls.”

The documentary gives an unfiltered look into what went on that season — the good and the bad sides of the players, coaches and management, including some controversy. ESPN chose not to cut out the consistent profanity because profanity is simply a part of the high-level sports culture.

Much of the controversy was centered around the Bulls’ general manager at the time, Jerry Krause. There was apparent tension between head coach Phil Jackson and Krause, so much so that Jackson was told his last season as head coach would be that of the season covered in the documentary. It would also be Jordan’s last season playing basketball, along with the final season that Pippen and other key players would play for the Bulls.

The tension is visually shown within the documentary, showing the interactions between them that ultimately led to the downfall of the Chicago Bulls dynasty, and made the ‘97 to ’98 year “the last dance.”

Some fans were concerned that the first two episodes only included backstories with information people already knew. In attempts to keep people engaged in the documentary, Thompson explained that the juiciest content was yet to come. He reassured viewers that the remainder of the episodes would prove to be just what they have been looking for and more, but they have to keep watching to find out.

Episodes one through six have since aired, but there are still four more episodes on the way. The uncensored versions can be found live on ESPN while the censored versions will be playing simultaneously on ESPN2. Though Netflix is a partner in the creation of the series, it is not available on Netflix in the United States. But, it is available on other streaming networks like WatchESPN and the ESPN app. “The Last Dance” will continue with episodes seven and eight on May 10 beginning at 8 p.m. CT.