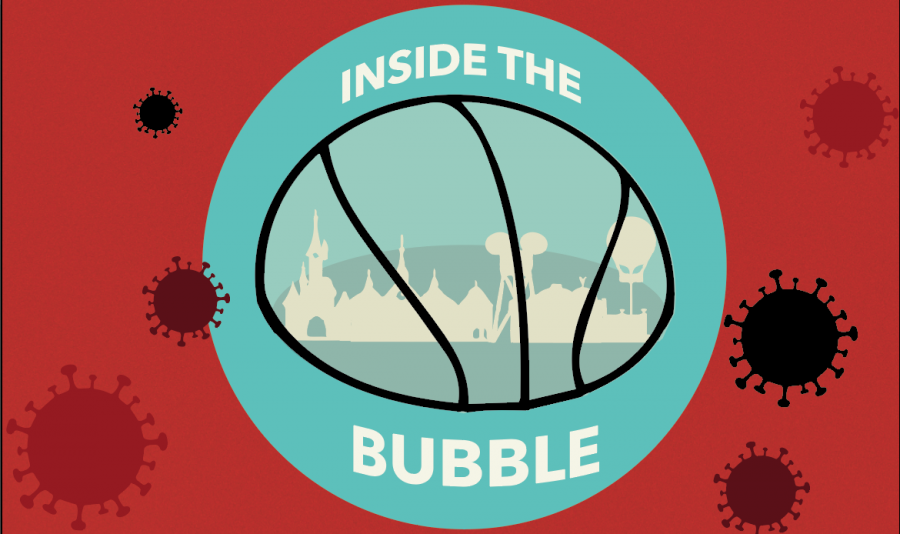 The NBA made the decision to isolate athletes to prevent the spread of COVID-19.

Leagues including the National Basketball Association (NBA), Major League Baseball (MLB) and the National Hockey League (NHL) had their active seasons suspended in March due to the growing concerns of the novel coronavirus. Owners and league officials have been eager to play, but outlining a plan to resume play has proved more difficult than first anticipated for each league to return to competition.

The NBA was the first league to announce that all games and practices would be suspended due to the presence of COVID-19 on March 11. After Rudy Gobert, a Utah Jazz player, tested positive for COVID-19 the NBA released a statement announcing that the season would be suspended until further notice. The Utah Jazz and Oklahoma City Thunder were set to tip off their Wednesday evening game until officials delayed tip off and the decision was announced that the game would not be taking place.

After months of creative planning, the NBA announced on June 4 their plans to return to play. On June 26 the plans were finalized for 22 teams to return to play on July 30 in Orlando, Fla. at Walt Disney World at the ESPN World Wide of Sports Complex. Games will be held at a single site, creating a “bubble” for the teams in order to decrease the likelihood of COVID-19 spreading.

The National Basketball Players Association (NBPA), public health officials, government officials and league officials outlined the health precautions that would be needed in order to keep personnel healthy. Fans and family will not be permitted to be in attendance at the games. Family and friends will be able to attend games after the first round of the playoffs and will also be required to stay within the bubble and follow the same safety precautions as the players.  There will be no visitors allowed in the bubble until mid-August and if a player leaves they are subject to a 10 day isolation period upon their return.

League Commissioner, Adam Silver, outlined that players and coaches would initially be tested daily. Silver said, “If we have a single player test positive, whether an All-Star or a journeyman, that player would go into quarantine.” Teams will play on if a member of their team tests positive and will treat it as an injury. However, Silver cannot determine how many positive cases would be needed in order for the whole operation to be shut down. Silver said that there is no number of tolerable positive tests that the league has determined would cause another suspension to the leagues season.

As fans have been eagerly awaiting the return of their favorite players and teams, players have been more reluctant and pushing back against the plans proposed by league officials. Numerous players have declared that they will not be participating in the restart. Kyrie Irving has been one of the more vocal players that does not support the plan to resume playing. Irving is still recovering from a shoulder injury that occurred in March but said he does not support going to Orlando and would rather focus on social justice and reform. Other players, including Memphis Grizzles forward Justice Winslow, said that the return was “All about the Benjamins” and he is “not sure if they really care if [players] get corona.” Despite the reason for a player to not participate in the restart, the player will suffer pay cuts for failing to report to their team.

Players and coaches participating in the restart reported on July 1, the cutoff date to enter the bubble. Teams will have three weeks to train before games officially begin on July 30.

Although the MLB had not yet started their regular season, teams were in the midst of spring training when the MLB announced on March 12 that all spring games were to be canceled and that Opening Day was suspended by at least two weeks due to the national emergency that the novel coronavirus had presented.

The MLB and Major League Baseball Players Association (MLBPA) went back and forth for months negotiating the best plan to resume play. Contract negotiations between the players and the league have delayed the process of developing a return to play plan. League Commissioner, Rob Manfred, has been on the hot seat throughout negotiations for providing false hope and then back tracking on his promises. Early in the process Manfred told MLB Network, “We’re going to play baseball in 2020. One hundred percent.” But Manfred had not provided any context as to how that would come to be. Manfred also guaranteed players a full pro-rated salary, but team owners had not agreed to those conditions before Manfred made that statement. Players have not been shy to make their frustrations known to the public.

Max Scherzer, a 2019 World Series Champion, three-time Cy Young Award Winner and ace pitcher for the Washington Nationals, has been very vocal on his Twitter account regarding his disappointment for league officials and team owners. Scherzer posted on Twitter, “Rob Manfred and the owners are walking back on their word…AGAIN. The fans do not deserve this. So I’ll say it one more time, tell us when and where.”

Similar to the NBA, there have also been players that have chosen to opt out of the 2020 season. Among a list of players choosing to opt out, more notable names include: Buster Posey, David Price, Ryan Zimmerman and Felix Hernandez.

After negotiations between the two associations were finally successful, the MLB announced the timeline and guidelines that players and personnel would follow throughout the season.

Players and teams were given permission to report to team workouts on July 1 at their home stadiums in order to prepare for Opening Day scheduled for July 23 and July 24.

Precautions being followed by the MLB include: players and personnel being tested every other day, temperature and symptom screening twice a day, antibody testing once a month and a player that tests positive will be placed on a COVID-19 related injury list and will be required to test negative twice before being allowed to return.

The MLB season is set to look very different once it is resumed. Teams will play 60 games against division and interleague teams in teams’ respective region. For example, the Kansas City Royals will play teams in the American League Central Division and the National League Central Division. Also included in the format change of the season is that there will be a universal designated hitter (DH), whereas a DH was previously only permitted in the American League. If a game goes into extra innings, a runner will be placed at second base to start the extra innings in order to limit the amount of extra innings played while increasing the chance of scoring.

Even though the baseball season will look very different this season, it will be a welcoming sense of normalcy to see professional athletes return to competition on the field.

The NHL announced on March 12 that the season would come to a pause in response to the coronavirus pandemic.

After the NHL and NHLPA agreed to negotiations regarding a Collective Bargaining Agreement (CBA), plans to resume the season could start to take place.

Unlike the other professional sports leagues, the NHL will forego the rest of the regular scheduled season and skip straight to the post season. There will be 24 of the leagues’ 31 teams participating in the restart competing in the tournament for the Stanley Cup. The Eastern Conference games will be played in Scotiabank Place in Toronto and Western Conference games will be help in Rogers Place in Edmonton.

Teams returned to training camp on July 13 and the first games are set to take place on August 1. Players and personnel will be quarantined to the hub cities and tested daily. Shall a player or coach test positive, they must self-isolate and test negative twice before returning to team activities. Symptomatic players must refrain from exercising during the 14 day isolation and must undergo a cardiac assessment before returning to physical activity.

One of the more difficult tasks of returning to play is player health privacy. Deputy Commissioner, Bill Daly, said, “We understand as a league we have an obligation of some transparency with respect to the COVID virus in particular. At least for now, we’re going to maintain a policy where the league is announcing basically league numbers, and clubs are really prohibited from giving any information with respect to COVID test results, and for purposes of making the system work, any injury information going forward.”

There have also been many NHL players that have chosen to opt out of the return to play. These players include: Travis Hamonic, Karl Azner, Mike Green, Sven Baertschi, Roman Polak and Steve Kampfer. These players cited personal family health reasons as their decision to choose not to return to the season. Players in the NHL will also undergo a full, physical examination to determine if their health would be put at substantial risk due to exposure to the coronavirus.

A return to play is a welcoming sight to the NHL, as the league was set to lose a large profit due to the loss of televised post season games. There were rumors that the NHL was set to cancel the rest of the season. Despite the format of the season looking completely different, a return to hockey will be welcomed by hockey fans and sports fans alike.