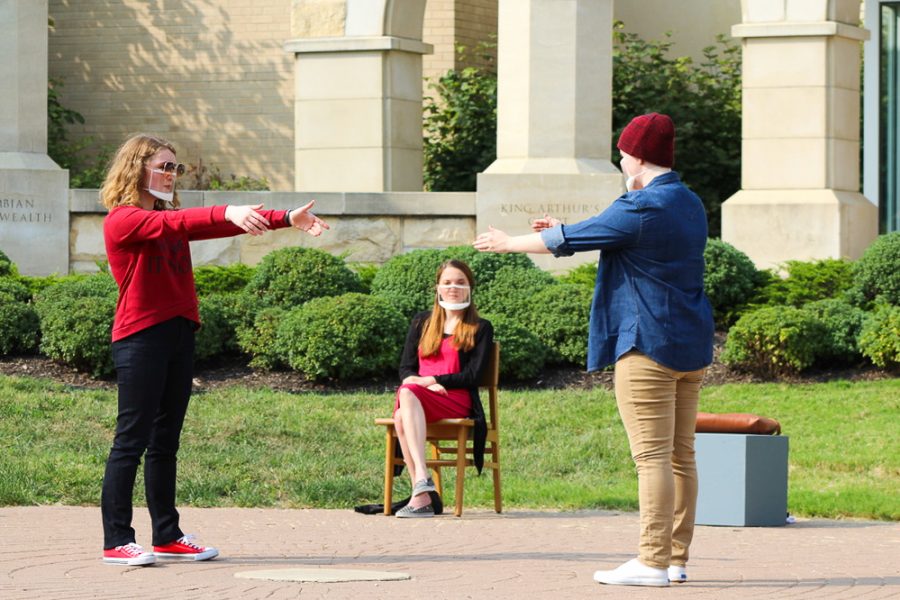 Freshman Sidney Alaimo (left) performs alongside Senior Rose Ulrich (right) in an emotional scene. Alaimo and Ulrich played child and parent, respectively, in the story "The Hug" by Marshall Foltz.

For the Baker University Theatre Department, a global pandemic does not deter from producing a play, and it even serves as a source of inspiration.

From Sept. 23rd to the 26th, the theatre department will be performing “Together While Apart: Plays About a Pandemic.” The show consists of three short plays, all centering around the theme of the pandemic and are interwoven with actor written monologues that detail their individual experiences with quarantine.

Moreover, while the play is in person, audience members who will not be in attendance have the ability to live stream both Friday and Saturday’s showings for free online. This is something that not only broadens the audience to people out of state, but is a feature that Associate Professor of Theatre Emily Kasprzak wants to continue after the pandemic.

“When I was thinking about our first show of the season, what I know from our experience in the spring is that we needed something that would translate from in person to online if we needed to make that shift. And so most plays aren’t written to be done online.” Kasprzak said.

While both “The Hug” and “Boredom, Fear, and Wine” were written to be online performances, Kasprzak chose the third play, “Sure Thing” as it still fit with the theme of the pandemic.

In addition, all three plays were chosen for their ability to be performed both in person with socially-distant blocking and be performed online if needed.

“The only thing that connects them together is the fact that they all deal with the pandemic. So, some of the pieces explore ideas of anxiety and depression while you are in quarantine and then Sure Thing explores this want of connection, but we can’t get on the same page as the other person,” Kasprzak said.

Barry Baker, senior and stage manager for the play, cannot wait to see the play performed in front of an audience.

“I’m excited to see if [the actors] relate to the audience. I’m also excited for [the audience] to see how the actors portrayed these characters,” Baker said.

In between each show is a monologue written by the actors to detail their own personal stories with the pandemic.

“If we are going to talk about the pandemic maybe we should allow the actors to create their own work as well,” Kasprzak said.

Each actor’s experience varied widely and Kasprzak believes this explores the different feelings people were having with being in quarantine. One of the monologs was written by two actors whose outlooks on the pandemic were complete opposites.

“One actor found it extremely limiting and very confining and the other actor loved being home,” Kasprzak said.

Morgan Masters, senior, was involved in the writing process for the monologs.

“It was a great experience to get to turn our emotions into an art that we can express to others,” Masters said.

Not only does the play detail life during the pandemic, but the production and rehearsing of the play shows the difficulties of doing a production with Covid-19 concerns.

The production will be performed outside at the Harter Plaza to ensure social distancing measures are being met. Two house managers will be guiding the audience members to their seats while also making sure people are wearing a mask and staying six feet apart.

Because the play will be outside, the actors will have attached microphones during the performances.

The position of the actors, their movements and their costumes were all specially chosen with social distancing and safety measures in mind.

For the performances, clear masks were chosen for the actors to wear.

“I thought that I was really going to hate it, but it is actually a relief to see the bottom half of people’s faces,” Kasprzak said.

However, while the actors understand the reasoning behind wearing a face mask, it still makes it difficult for them to perform.

“The main difficulty is getting to fully express myself facially. As an actor, your face is your biggest tool. So, when that tool is compromised it makes things a little difficult,” Masters said.

Even the way the actors rehearsed was changed because of the pandemic, with rehearsal starting off on zoom instead of being held in person.

“One of the biggest challenges doing virtual rehearsals is things like pacing. So how quick you are, and comedic timing is really hard to do through zoom because of lag and internet connection. So, comedic things like speaking at the same time or overlapping each other was hard to establish during our online rehearsals until we got in person and we were able to do that,” Kasprzak said.

However, this allowed the actors time to familiarize themselves with their characters.

“When we are over Zoom it really gives us the chance to cement our lines and get a deeper dive into the character. And then when we meet in person the physical part can be matched with the mental part we worked on via zoom,” Masters said.

The total runtime of the production totals 40 minutes and this was done to ensure the audience wouldn’t stay in one place together for too long. But this too has changed how the cast and crew prepare for their performances.

“I am normally used to seeing a few people and then working certain scenes but doing the short one acts, you run the whole thing and do it once a week,” Baker said.

Overall, Kasprzak wants the audience to know the play is about bringing hope instead of focusing on the depressing elements of the pandemic.

“I think that people might think that these plays might be depressing but they are actually really funny. We have spent a lot of time and care making sure this is a light hearted, hopeful look at the pandemic, even though some of our experiences have been more on the depressing side there is still a lot to be hopeful about,” Kasprzak said. “Our goal was to make you feel good while we all commiserate about this thing we are going through.”