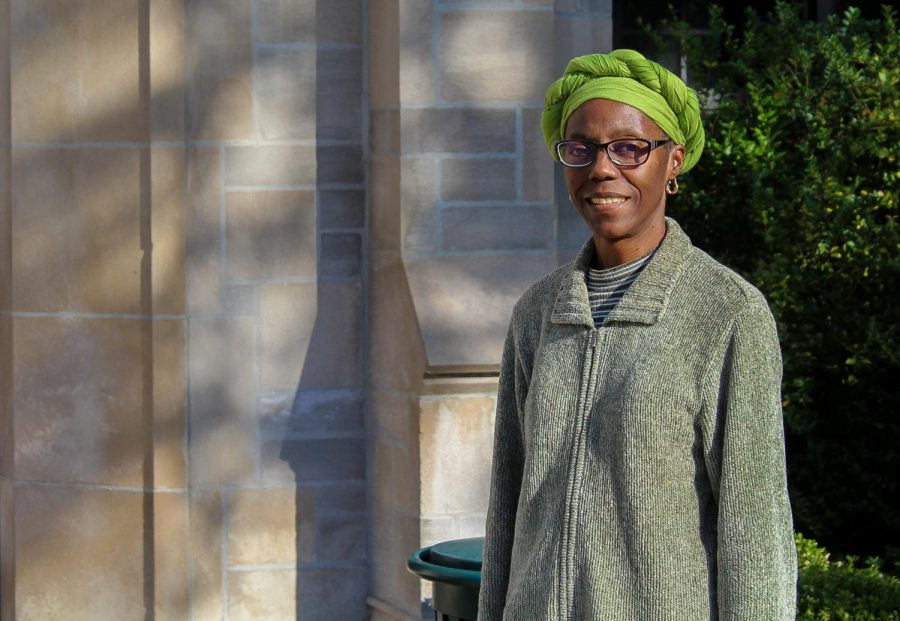 Associate Professor of Biology Charmaine Henry had always been fascinated with living things. Her curiosity ultimately led her to Kansas, where helping young people find their paths in life and achieve success became her source of happiness.

Henry grew up in Antigua, a tropical island in the Caribbean, which was formerly a British colony. Overall, she enjoyed her childhood, especially the time spent with her parents, siblings, grandparents, aunts, uncles and cousins. Henry’s family got their first television when she was eight years old, and there was only one channel, which was mostly news.

But children always found activities to keep themselves occupied. When they were not in school, kids went hiking or to the beach, hunted crabs, chased sheep and goats around the fields, attended Sunday school, grew vegetable gardens and raised chickens. Along with staying active and involved, Henry loved reading and visited the library often.

“There was never a dull moment,” Henry said. “My family is very close-knit, so our favorite events were activities done together.”

The biggest hardships she and her family faced were recovering from hurricanes and droughts. Sometimes they lost entire crops and animals due to destructive weather conditions, but they were always able to start over.

In 1999, Henry was working in a research lab at the University of Virginia. She was looking for a full-time teaching position in biology when she came across a job advertisement from Baker University. Having never been to Kansas, she was intrigued and applied for the job.

“During my interview, I was fascinated with the history of the campus,” Henry said. That fascination led to a love for Baker University that would keep Henry here for 20 years and counting. Colleagues are able to speak to her character and her impact on campus.

Department Chair and Associate Professor of Education Amy Wintermantel described her colleague and friend as conscientious, servant-minded and humble with high integrity and a bright and curious mind.

“In order to change the current climate in our country, we are going to have to think less about ourselves and more about the people around us,” Wintermantel said. “Charmaine gives little thought to the inconvenience(s) of serving others. She is committing the rest of her life to give three little kids a stable home and loving family. Day by day, making the world a better place, one child–or three–at a time.”

Henry has had her fair share of obstacles to overcome, but she has been able to be proud of self-achievements that have kept her going.

“Receiving my doctorate from an American university was a big moment of pride because I had to leave my native country and make a cultural shift in order to pursue that goal,” Henry said.

Though some may say being the only Black academic professor on the Baldwin City campus is a big deal, Henry has chosen to not allow the lack of representation to weigh on her mind. Rather, she chooses to simply be present as herself.

“This is not something I think about because there is so much more to life than my ethnic background,” Henry said. To her, personal values and self character hold much more weight than outward appearances.

Even more than what she has accomplished for herself, Henry’s true pride and joy lies in what she has done for others. Activities with her church occupy a large part of Henry’s time outside of teaching. She is also a licensed foster parent and has cared for about a dozen children over the years. In 2016, Henry went back to Antigua to take care of her mother for a few years before she passed away. Since returning to Kansas, she quickly picked up where she left off.

“I am an advocate for the needs of children, especially those who are facing hardship,” Henry said. Currently, she is in the process of adopting three siblings from the foster care system in Kansas.

Students who have taken Henry’s classes can tell she cares about their success beyond college. Besides her detailed and well-planned lessons and assignments, Henry exudes passion throughout her classroom. Senior Morgan Bohnenstiehl was in her Comparative Vertebrae Anatomy class when Henry shared her news with the class about recently being approved to adopt.

“At the beginning of class she told us she wanted to share something exciting, and she could not stop smiling while talking about it,” Bohnenstiehl said. “Dr. Henry genuinely cares. She is just so pure.”

When she retires and her meaningful work is finally done at Baker, Henry plans to keep helping children in need, especially in her native country. Starting a charitable foundation is one of her dreams. But until then, she is focused on living in the moment and making real-time change.

“My hope is that I can raise my children to thrive, to overcome their challenges and to make a positive impact wherever life takes them,” Henry said.