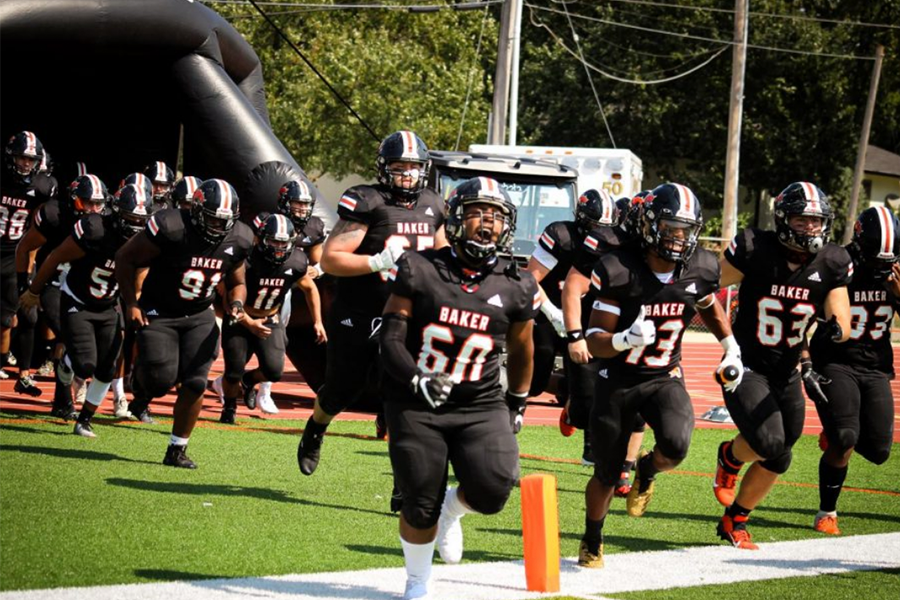 Offensive lineman Evan Bishop runs with the Baker football team in their iconic entrance through an inflated helmet.

The Baker University Wildcats football team opened their season against the Peru State College Bobcats at Liston Stadium after their first two games had been postponed due to COVID-19 safety precautions.

The heavily anticipated season debut for the Wildcats football team did not disappoint as the Wildcats won convincingly against the Bobcats by a score of 41-2.

The Wildcats defense held strong against the opening drive of the Bobcats to force a three and out and a punt. The Wildcats then took control of the score with a 31-yard field goal made by freshman kicker, Devin DeRousse, to make the score 3-0.

The Wildcat defense once again held the Bobcats and forced a punt to the Wildcats. On the next offensive drive, running back JD Woods ran in a four-yard touchdown. The extra point was good, and the Wildcats pushed the score to 17-0.

Grant Elston came away with an impressive interception of the Bobcats as the Bobcats were knocking on the door to score their first touchdown of the day. After the Elston interception, the offense took over on their own two-yard line.

However, the Bobcats would then get their first points of the day as the Wildcats fumbled the ball in their own endzone, resulting in a safety for the Bobcats to bring the score to 17-2.

At the conclusion of the first half, the score remained 17-2 in favor of the Wildcats.

Aguinaga led the offense to an explosive second half. Coming out of halftime, the Wildcat offense received the kick and drove the ball 53 yards in just five plays and capped it off with a 13-yard touchdown run by Aguinaga. The extra point by Derousse was good, making the score 24-2.

The Wildcat defense continued to shut down the Bobcat offense and get the ball back into the hands of the Wildcat offense. The Wildcats would go on to make another field goal and score another touchdown, bringing the final score to 41-2 over the Bobcats.

The no. 14 ranked Baker University football team will travel to Dubuque, Iowa to play the 1-1 Clarke University Pride next weekend on Oct. 3.