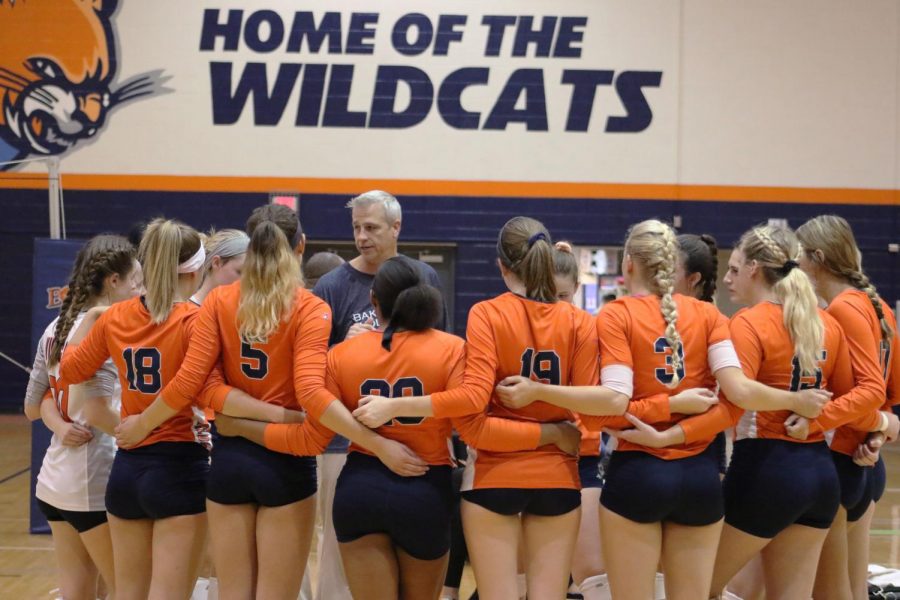 Baker University Volleyball looks to get back on track for Oct. 9 match.

Baker volleyball suffered a tough couple of losses in their last competitions. Both matches started out with the Baker Wildcats winning the first set, but the Wildcats struggled as the match continued. Head Coach Matt Windle understands the challenges presented this season but did stress that the weekend is an important time to bounce back. The Wildcats have now fallen to 1-4 on the young season.

The Wildcats suffered a 5-set loss to the Peru State College Bobcats last Saturday. Baker led 2 sets to 1, but the attack game suffered greatly in the last two sets. The Wildcats had a 0.225 attack percentage after 3 sets fell to -0.025 (-1 kills in 40 chances) in the last 2 sets combined. Alexis Montana led the Wildcats in points as she accumulated 10 kills and 3 errors in 21 chances. She also finished 2nd on the team that night in assists (8) and digs (9).

The Wildcats backed up a devastating loss to the Bobcats with a four-set loss to the Benedictine Ravens on Tuesday night. This game yet again came down to the Baker attack falling short. Baker finished with 27 errors compared to Benedictine’s 21. The attack percentage was the biggest eye-popping stat from the night as the Wildcats finished at 0.126 and the Ravens at 0.234.

Taylor Kile led the Wildcats with 12 kills and 2 errors in 29 total chances. The Wildcats also had several other steps in the passing and defensive game. Sophomore Saylor Zurcher and junior Jordyn Hasbrouck combined for 31 digs in the match. Megan Milroy and Skyler Bruck combined for 37 assists with 23 from the senior, Skyler Bruck.

On Friday, the Wildcats attempted to bring that early success again against Park. The Wildcats had won two consecutive 1st sets heading into this showdown. Baker struggled with their attack as their attack percentage finished the match at 0.143. The Wildcats ended up losing to the Pirates in consecutive sets; 25-18, 25-15, 25-20. The Wildcats were led by seniors Skyler Bruck (11 assists and 8 digs) and Taylor Bell (6 total kills).

On a back-to-back, The Baker Wildcats took on the MidAmerica Nazarene Pioneers on Saturday. The Wildcats were looking to gain some early momentum after their 3-game skid. The Wildcats again struggled with their attack throughout the match. The combination of a struggling attack didn’t go well for the Wildcats considering the Pioneers were firing on all cylinders.

The Baker Wildcats will be in action on Friday at home in the Collins Center against the Evangel University Crusaders. The Wildcats will look to get back on track and snap a 4-game losing streak.