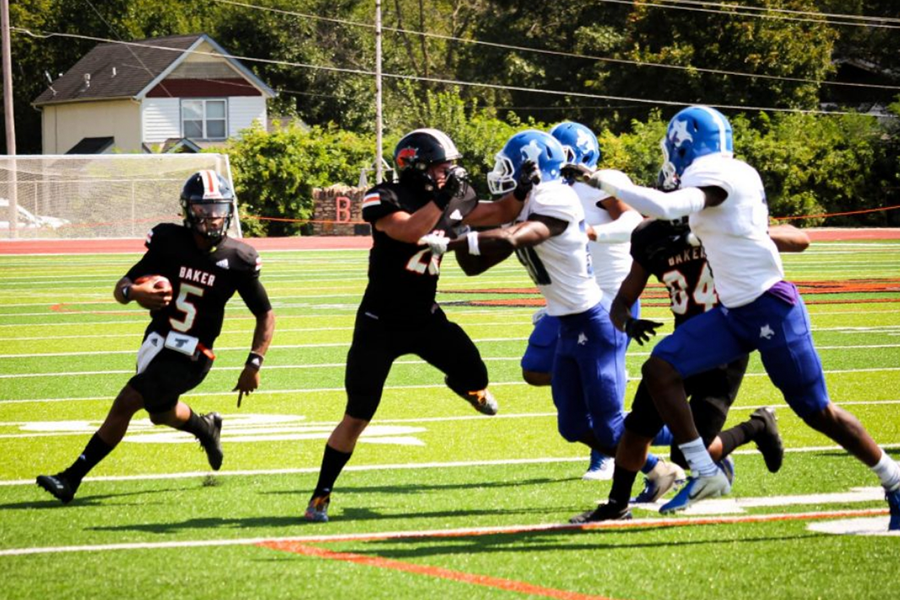 Marco Aguinaga led the Wildcats to a commanding win over the Clarke University Pride for their second straight win.

The Baker University football team traveled to Dubuque, Iowa to take on the Clarke University Pride and came away with the win, 57-3.

The Wildcats were the first to put points on the board with a touchdown ran in by quarterback Marco Aguinaga with six minutes left in the first quarter. The extra point by Devin DeRousse was good, making the score 7-0 for the Wildcats.

Coming into the game, running back JD Woods needed just 56 yards to break the Baker University all-time rushing yards record. Woods was able to break this record in the middle of the second quarter after a 43-yard touchdown run. Woods finished the game by leading all rushers with 102 yards on 18 carries and two touchdowns.

The Wildcats went into halftime with a commanding 23-3 lead over the Pride.

Coming out of halftime, the Wildcats were firing on all cylinders. Shortly into the third quarter, DeRousse nailed a 35-yard field goal followed by a touchdown by Brennan Feeback, making the score 33-3.

DeRousse then pushed the Baker lead to 36-3 after an impressive 49-yard field goal.

Rashaan Houston extended the Wildcat lead to 43-3 with a rushing touchdown. Woods followed by running in his second touchdown of the day, making the score 50-3. Following the touchdown by Woods, Freshman Michael Walker recovered a fumble by the Pride and ran it in for a touchdown, bringing the final score to 57-3.

The Wildcats will look to win their third game in a row as they return to Liston Stadium to play Graceland University on Oct. 10 at 1 p.m.