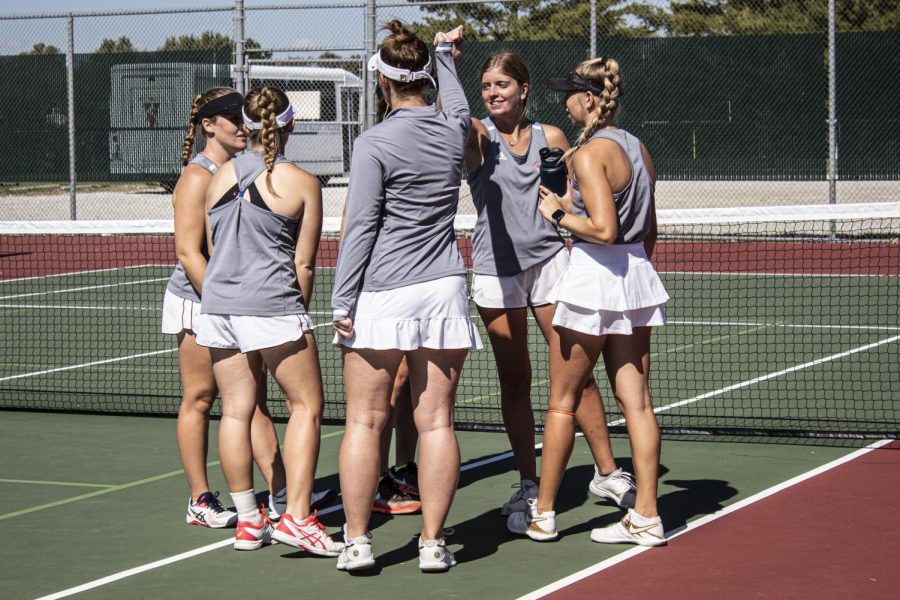 Women's tennis celebrates after their doubles win against Missouri Valley

The Baker Tennis team was in action this last weekend at home against William Jewell and Missouri Valley in their first true head-to-head matches of the year. The Wildcats enjoyed some early season success as they won their first dual of the year.

Baker’s women’s team defeated the William Jewell Cardinals by a score of 5-2 last Saturday to kick off their season. The win made it the Wildcat’s third consecutive win over the Cardinals, dating back to last fall.

The Wildcats were led by Senior Kayelee Smith and Junior Cortlyn Wolfe in the match against the Cardinals. They were able to mount a comeback in their doubles match down 3-0 and rally to a 6-3 victory. Baker will continue to try to ride this momentum all year from the upperclassmen duo of Smith and Wolfe.

The men didn’t have the same success on the other side, however. The Wildcats men’s team dropped their 11th straight contest to the Cardinals by a score of 5-2. Senior leadership will be key all year for the Wildcats as Pedro Ferretti, Carson Fitzgerald and Adam Ruckman were able to muster a few points against the Cardinals.

Both the men’s and women’s team struggled to find success in their Sunday matchup against the Missouri Valley College Vikings. The men’s team was shutout 7-0, while the women lost 6-1. Junior Cortlyn Wolfe was able to muster a point in her singles match to help the Wildcats avoid a shutout.

The men’s and women’s teams will be back in action on October 16th and 17th against Tabor College and Rockhurst University. Momentum will be key in these matches for the Wildcats who look to get back on track.