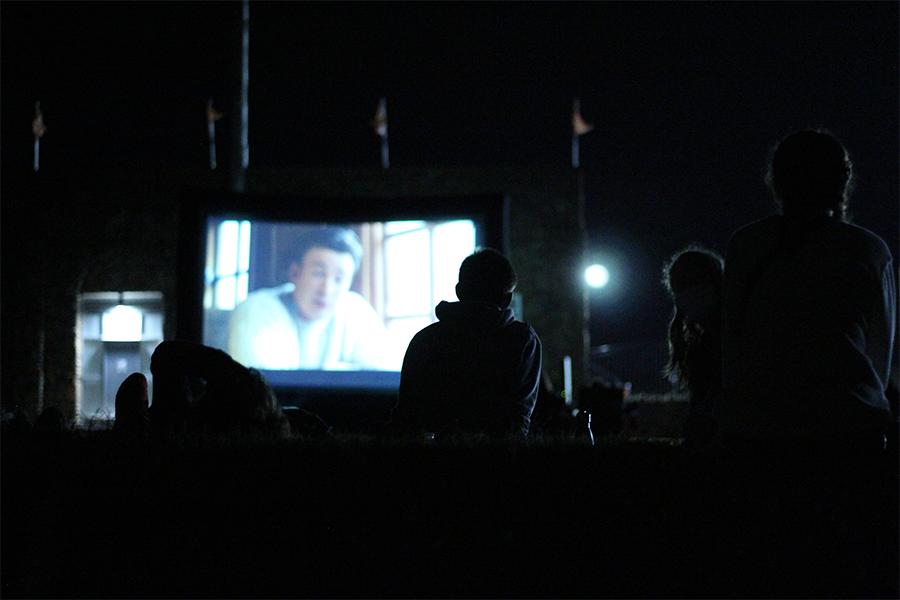 Baker students watch “Knives Out” from the edge of Liston Stadium’s parking lot.

On Oct. 9, Baker University Student Activities Council (SAC) hosted a movie night at Liston Stadium as part of the 2020 Homecoming week. The event included a double feature of “Knives Out” and “Black Panther” and provided snacks such as candy, pizza and s’mores. Attendees were able to view the films from their own seating or from the comfort of their cars.

Among the planners of the homecoming movie night was Sophomore Caitlyn Lucas, the entertainment coordinator for SAC.

“We had to come up with something big, we also had to make sure that everything was safe,” Lucas said.

The movie night is not the first that SAC has hosted throughout the fall semester. The organization purchased a screen to allow for the event to become a recurring occasion and has already arranged two other successful movie nights.

“We’ve been able to do a lot of movies on it, and they always went pretty well,” Lucas explained.

Lucas further elaborated that the idea of a movie night was decided among SAC members, but further details were up to students. The organization put out a poll assessing students’ preferences on film selection and whether to do a single or double feature. A double feature was chosen with an almost unanimous vote.

“We come up with ideas, but it’s students and the student body that come up with the final product,” Lucas stated.

Audience members at the movie night included Baker University Sophomores Kysn Papke, Jezeriah Simpson and Alyssa Waller, who came to the event together. The group sat on towels and lawn chairs to watch the films.

Papke was quite excited for the event and was looking forward to the start of the movies.

“This movie is what I’ve been waiting for all week,” Papke said. As “Black Panther” was beginning, Papke added that he has the Black Panther on his Crocs and is a big fan of the film.

Lucas also explained that precautions surrounding COVID-19 were an element involved in the event’s planning.

“[COVID-19] was part of the reason we went with the movie, especially in a place like this where you can spread out better than Hartley Plaza,” Lucas explained.

Simpson appreciated that the event was able to accommodate the homecoming experience despite public health disruptions.

“It’s nice that they were able to adapt to make college feel kind of normal,” Simpson stated.

“I really liked it. It was just different because not many people showed up as opposed to last year, when a lot of people showed up to everything. But, because of COVID, it can’t really be like that,” Davis said. “I mean, it’s good because you know people are just being careful—it’s just kind of sad because you miss all that human interaction.”

Lucas offered some final insight into the situation, explaining the efforts that went into the event and making it safe for everyone involved.

“[SAC] wants to make sure that people have a good time while also being safe. We’re trying our best. If you feel safe enough to come to an event, we greatly appreciate it,” Lucas said.