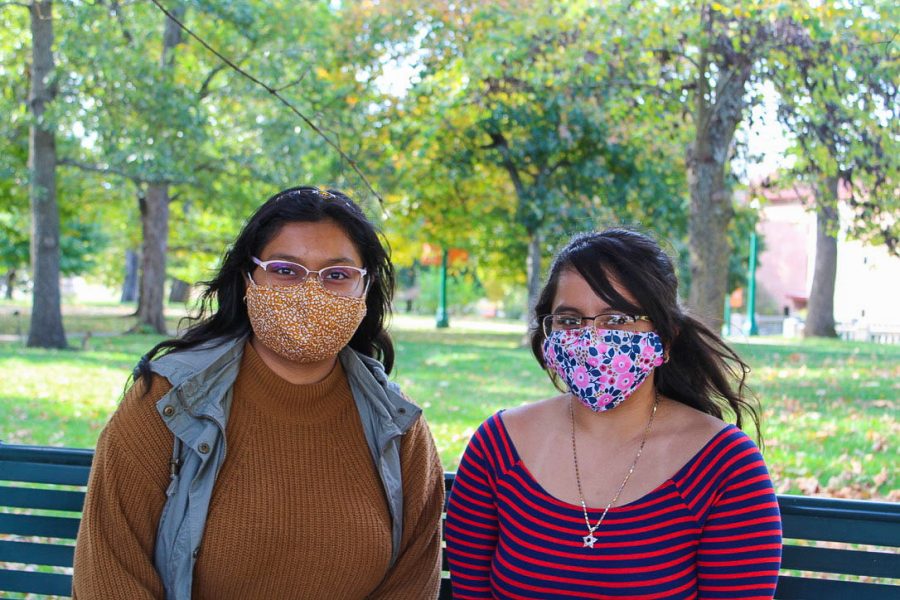 Sophomores Arleth Ramos-Valles and Yurisa Zepeda are both founders of Molcajete, Baker's Hispanic and Latinx club.

Two best friends came to Baker in 2019 with a plan to stick together, to reach their aspirations of becoming nurses and to always remember their roots. To create a sense of a home-away-from-home, Sophomores Yurisa Zepeda and Arleth Ramos-Valles set out to bring their love for their cultures to campus. In doing so, they made school history with Baker’s very first ever Hispanic/Latinx student organization.

Zepeda was born in Los Angeles, Calif. and was raised in Tlaxcala, Mexico. While many of her fondest memories were centered around Mexican culture, she has not always had an easy time being accepted, and in turn, accepting herself.

“Being Mexican-American, there were times where I struggled with my own identity and I would feel ashamed of being Mexican or being American, but I learned how to be proud of who I am no matter what,” Zepeda said.

Ramos-Valles was born and raised in Kansas City. She is both Mexican and Honduran. “I am very proud of my heritage and would never change that,” Ramos-Valles said.

Zepeda and Ramos-Valles wanted to help others find the same type of passion that has pushed them through low times. After doing some research, and with help from former Assistant Director of Student Life Josh Doak, they were able to understand the process of starting a new organization. Eventually, they officially founded Molcajete in the summer of 2020.

They wanted a name that was strong, but also had meaning. The pair went back and forth between possible names, but finally decided on “Molcajete.” A molcajete is used to grind and mix ingredients together to make delicious foods, like salsa. It adds various ingredients to create something great. With Molcajete, Zepeda and Ramos-Valles hope to bring students with commonalities together to create something great at Baker.

Having to struggle against stereotypes, judgements and microaggressions by peers and superiors have caused adversity for Zepeda and Ramos-Valles. There are times they feel they do not belong due to lack of representation on campus.

During her freshman year orientation, Ramos-Valles spoke Spanish to her mother to help her understand what was going on. She was stared at angrily by a woman because who overheard her speaking her native language.

“I remember immediately feeling like I chose the wrong school, and I felt so excluded from everyone,” Ramos-Valles said. “That was one of the things that motivates me to create this organization with my best friend.”

Through Molcajete, Zepeda and Ramos-Valles have been able to find their places at Baker, and they want the same for every other student. They want to show the diversity within Hispanic and Latinx communities, and that no box is big enough to lump everyone together. They will have important conversations while celebrating traditions, history and accomplishments.

Molcajete has not yet hosted any events or meetings due to the COVID-19 pandemic. Events within Hispanic/Latinx cultures are inherently community based and family-oriented. They are usually held close together in proximity, which is not possible at this time. An event is currently in the works for the near future.

In the meantime, Zepeda and Ramos-Valles have hosted multiple meetings as the co-committee leaders for Hispanic college students for the multicultural diversity organization Mungano. They led students through playing “Lotería,” a traditional Mexican card game, and they shared their history and culture while debunking stereotypical myths.

They plan to honor Day of the Dead by setting up an Ofrenda, which is an altar with a collection of photos and objects to celebrate and remember loved ones who have passed, on Oct. 30 through Nov. 2 in the Harter Union.

Assistant Director of Wellness and Inclusion Shelby Perez recognizes the importance of having an organization like Molcajete. Though this is her first semester at Baker, she is in awe of the qualities and potential already in these young leaders.

“This organization gives students an opportunity to be a part of something they are passionate about and explore culture in a fun way,” Perez said. “Yurisa and Arleth are the future of the university.”

Being co-founders of an organization can be a bit intimidating because of the new responsibilities, but it has proved to be a blessing in a disguise. And as for their calling to make change on Baker through Molcajete, Zepeda’s mother would respond, “si Dios quiere” which means “if God wants it.” Now that they have accepted the challenge, they are ready to make their marks.

“When I came to Baker I did not feel like I belonged, but being able to create something to show the true beauty of the Hispanic/Latinx community is just amazing,” Ramos-Valles said. “Sí se puede (Yes, we can).”