Students reflect on Last Lecture message given by Tim Byers 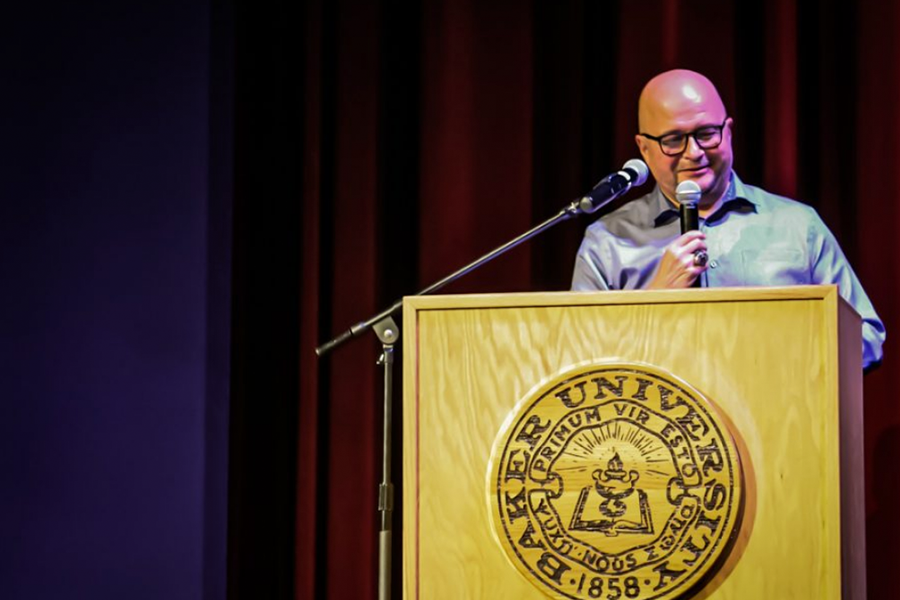 Tim Byers speaking at his last lecture, "Sometimes you have to leave to be home."

With the title “Sometimes You Have to Leave to Be Home,” Cross Country Head Coach Tim Byers gave his speech as part of The Last Lecture Series at Baker on Oct. 5. The lecture was held in Rice Auditorium and live streamed through Zoom.

Byers shared his life story and gave advice about taking chances and being brave enough to find home. Byers grew up in Lawrence, Kan. in the 70s. His parents divorced at a young age, but he always had an abundance of love for them.

Living with his mother, Byers grew up on welfare. It was tough for a single mom. By the time he was a senior in high school, he had attended 12 different schools, three of which were in seventh grade alone. He did not typically see these obstacles as hindrances. Byers remembers being a child and simply wanting to live his life and “just play.”

Eventually, Byers joined the Air Force National Guard because he needed direction and to be challenged. Though he was only there for a short time, the experience truly woke him up and proved to be a defining moment in his life.

Byers explained how within the Air Force, individual identities are stripped away. Members have their heads shaved and are made to do routine actions perfectly in sync.

“If you don’t march the same as everyone, you’re not being a part of the team. I learned discipline and teamwork really quickly,” Byers said during his Last Lecture.

Byers earned an associate degree from Johnson County Community College. He then attended Park College (now Park University) where he was a thrower on the Track and Field team and earned his bachelor’s degree in sports medicine. Being a college athlete himself gave him the wisdom to then become a college coach and teacher. His personal goals regarding his education did not stop there. Finally, he earned a master’s degree in human performance and biomechanics from the University of Wisconsin-La Crosse.

In 2014, Byers joined the Baker athletic staff as an assistant coach for track and field and cross country. Later, he became the director of both programs and the head cross country coach.

Junior Ty Packard has attended nearly every Last Lecture at Baker, so when he heard his cross country coach was going to give one, he was excited to learn more about Byers and his view on life.

Among various lessons Packard took away from the lecture was that change in life is inevitable. Leaving home can be intimidating, but he should not be afraid because there is always more to explore, understand and determine his future from.

Packard admires how determined Byers is, no matter what it is he is doing.

“Coach Byers encourages preparation and making progress beyond the point you are at currently,” Packard said. “He always has a plan in his back pocket, even when it seems like each piece to the puzzle does not match.”

Sophomore Talisa Stone liked that Byers discussed how coaching at a Division I university was his ultimate goal, but he ended up at Baker. Sometimes the notion is that being at a Division I school is the quintessential status, but Byers believes there is just as much prestige being at an NAIA university like Baker. Byers has found his calling at Baker and would not change a thing.

“Coach Byers puts in so much work, effort and love toward all of his team,” Stone said. “He found a job he genuinely loves, which I think is amazing.”

Leaving to find his home was ultimately the best decision Byers made for himself. Beyond his life accomplishments, Byers can be proud of the person he is. When his time at Baker ceases, he does not hope for a statue of himself or a trophy. Rather, he hopes he has made a long-standing, positive impression on those around him.

“Everything I have done has led me to this point right now,” Byers said during his Last Lecture. “I want to be remembered as a good person, a person that was always there to help someone else.”