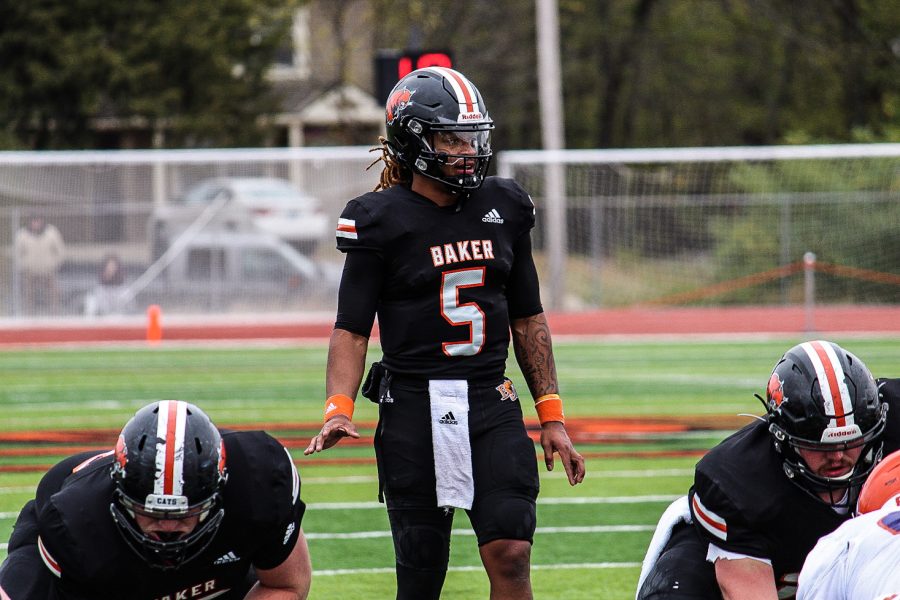 Quarterback Marco Aguinaga prepares for the next play.

After having the past two games postponed, the Wildcats came out firing on all cylinders against the visiting Missouri Valley College Vikings.

The Vikings received the ball to open the game, but the Wildcat defense quickly took possession after an interception by Grant Elston to quickly take control of the game.

The Wildcats took advantage of their first possession on offense and gained a 7-0 lead after a 14-yard touchdown run by quarterback Marco Aguinaga and the extra point made by Devin DeRousse.

The Wildcat defense forced the Vikings to punt, giving the ball back to the explosive Wildcat offense.

With six minutes left in the first quarter, the speedy Rashaan Houston ran in the endzone untouched for a 17-yard touchdown. The extra point was good, making the score 14-0.

Towards the end of the first quarter, the Wildcats scored once again off a one-yard touchdown run by AJ Totta, bringing the score to 21-0.

Just three minutes into the second quarter, Aguinaga connected with wide receiver Kwan Brooks for a 53-yard touchdown pass, bringing the score to 28-0.

After three touchdowns by running back JD Woods in the second quarter, the Wildcats went into halftime with a commanding 48-0 lead over the Vikings.

The Wildcats opened the second half with yet another touchdown by JD Woods, his fourth of the day. The extra point pushed the score to 55-0.

Woods hammered the ball down the defense of the Vikings and finished the day with 142 yards on 16 attempts, with his longest run being 42 yards.

The Wildcat defense has dominated their opponents all season and continued that dominance against the Vikings. The defense did not allow a touchdown until the end of the third quarter and finished with four interceptions.

The Vikings would go on to score another touchdown in the fourth quarter, bringing the final score to 55-14.

The Wildcats will look to continue their undefeated season against Central Methodist University at Liston Stadium on Oct. 31 at 1 p.m.