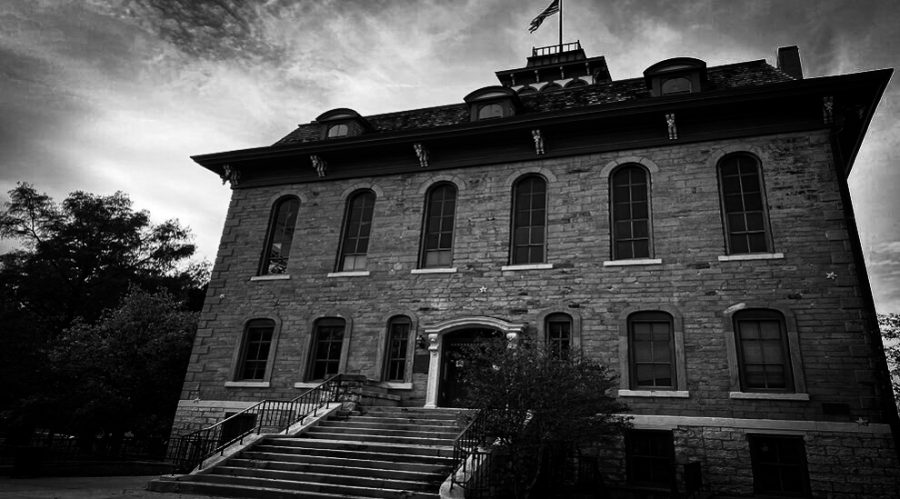 Parmenter Hall is a popular site for students to experience abnormal events.

As the oldest university in Kansas, Baker University has its fair share of ghost stories that both faculty and students have experienced. Almost every building has some story attached to it and, in honor of Halloween, some of those stories are being shared.

Rice Auditorium is a notorious place on campus for students to experience the unexplainable. For theatre students, there is one entity that likes to make their presence known.

Kristina Taylor, senior, experienced this entity her first semester at Baker while rehearing for an upcoming theatre production.

Taylor detailed how she returned around 11:30 one night after she had left her keys at Rice Auditorium.

“I was already creeped out when I walked in. I could hear creaking everywhere,” Taylor said. “I walked across the stage hearing weird humming sounds, and as soon as I grabbed my keys from by the dressing room, there was a huge crash from the stage.”

While Taylor cannot confirm what she experienced was a spirit or not, she did not hesitate to immediately leave the auditorium. However, this unexplained occurrence has not solidified her belief in ghosts.

“Honestly, I don’t know how I feel about ghosts. I guess if I do believe in them, I don’t see them as evil or vengeful, just people trapped here trying to get out,” Taylor said.

Garcia has been experiencing unexplained events inside her room in the Alpha Chi Omega house since the second day she moved in.

“I had a strange dream of the girl looking at me and saying ‘help’ in a soft voice. It sounded like she was right by my ear, but I was looking straight at her. She laid horizontally in front of me and I sleep on the top bunk. It was like she was sinking into the ceiling,” Garcia said.

While Garcia does live with a roommate, she stated the activity usually occurs when her roommate is in class or they both are asleep.

The activity began with tapping noises occurring on the door to the room which Garcia stated her and her roommate still hear occasionally.

“It was like a light tap in threes and it sounded like someone was lightly knocking on the door! I would get out of bed to go open the door and no one would be there,” Garcia said.

However, the activity quickly progressed from there with Garcia’s closet becoming a paranormal hotspot, a term given to a location or object that draws a lot of paranormal activity.

“I always keep my closet closed because I just get weird vibes. But sometimes I’ll go to class and when I come back it’ll be cracked open or opened all the way,” Garcia said. “I always made sure it was closed and latched before I leave too which made everything double weird.”

Moreover, Garcia has also experienced objects within her room move without any probable cause.

“I sometimes left my pencils out and my metal straws on the desk. One day I came back from class and my metal straw was on the floor. It had been in the middle of the desk and I placed it so it wouldn’t roll off the desk,” Garcia said.

One prominent way Garcia experiences the entities in her room is through her dreams. Garcia detailed how she has had vivid dreams in her sleep of both the girl who haunts her room in addition to an angry male spirit.

Garcia has only just recently experienced the male entity while she was awake and stated it was the most terrifying thing she has experienced inside the room.

This encounter occurred recently when Garcia was taking a nap in her room when she suddenly felt like something was on top of her.

“I didn’t open my eyes, but I felt these hands pushing my shoulders into my bed,” Garcia said.

Then, Garcia said the man began yelling at her to be quiet and saying, “shut up.”

“Every time I moved, I just felt like I was sinking lower into my mattress,” Garcia said. “When I would try to say something or yell at the man it felt like he was covering my mouth and muffling my sound. I woke up gasping for air and I felt really alarmed.”

However, the male entity is the only aggressive spirit.

“Every now and then I’ll still get dreams of the girl but now she just looks at me or says hello. Sometimes she will smile a little, but she never means to be creepy or scary. I’m never scared when I see her.” Garcia said.

Faculty members have also experienced the unexplainable on Baker’s campus.

Associate Professor of History, John Richards, recalls one story he still cannot explain that occurred at the Old Castle Museum.

During his second year teaching at Baker, Richards had partnered with the Baldwin Elementary School to provide a unique opportunity for both his history students and the elementary students. He was teaching a course on Ancient Egypt the same year the “Reading Is Fundamental” program’s theme was on Ancient Egypt.

The end result was the creation of the Baldwin University Museum of Egyptology which his students created in the first floor of the Old Castle. One night while working on creating the museum, the students had left early and Richards was alone in the building.

He turned the lights off and set the alarm. He then walked to his car, which was facing the Old Castle Museum and readied himself to go home.

He looked up at the windows and noticed only the second floor light was on. However, the way the light switches in the Old Castle Museum work does not allow this to happen. One switch controls the lights for both the second and third floors of the building, meaning both need to be on.

Then, through the sheer curtains hanging in the windows, Richards saw a human silhouette pass through the window in the far-right corner. He turned his car on and went home.

Richards maintains the light he saw was not the security light as that was installed later and that one glows red. The light he saw that night was normal.

Out of all the things Richards has experienced on campus, that is the story that creeps him out the most.

“That is the only one I could not explain,” Richards said.