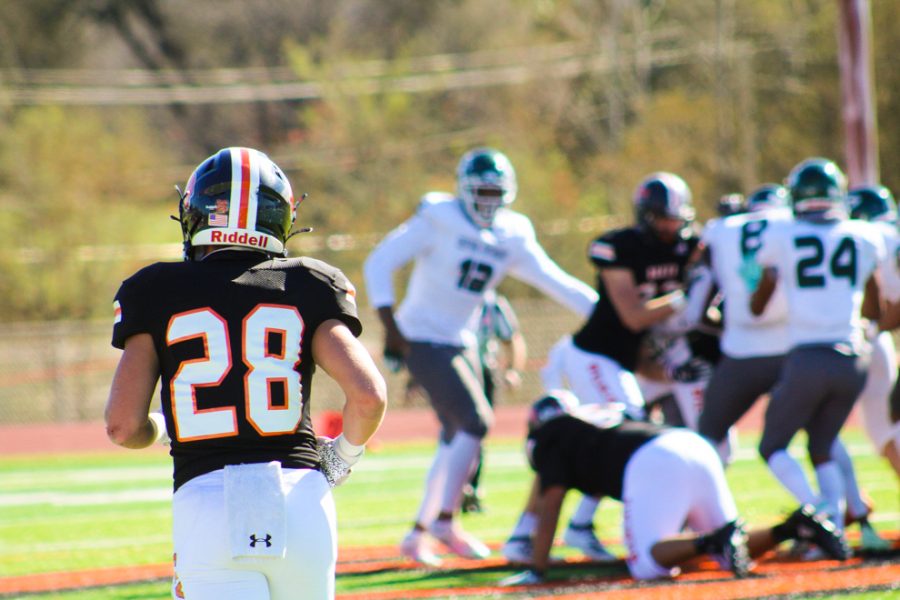 The Baker Wildcat football team hosted the Central Methodist University Eagles at Liston Stadium as the Wildcats celebrated and honored their seniors on senior day.

The Wildcats defeated the Eagles 40-7 to improve to 4-0 overall and 2-0 in the Heart of America South division.

Coming into the game, CMU was 3-2 on the season, but the Wildcats proved too much for the Eagles to handle.

The Wildcats scored first to take the lead with 3:20 left in the first quarter off of a one-yard touchdown run by Senior JD Woods. The extra point was made by Freshman Devin DeRousse to make the score 7-0.

On the Eagles following drive, Junior defensive back Mitchell Henry picked off the Eagles’ quarterback and returned it 38 yards for a touchdown to quickly push the Wildcat lead to 14-0 with the made extra point by DeRousse.

Will Cox followed with an interception of his own to close the first quarter for the Wildcats.

The Wildcat defense forced a safety by tackling the CMU quarterback in the end zone after Wildcat punter, Kanyon Sanders, pinned the CMU offense at the one-yard line to make the score 16-0, Wildcats.

With 6:20 left in the second quarter, the Wildcats pushed the score to 23-0 after a trick play 81 yard touchdown pass from Woods to wide receiver, Tanner Cobb.

The Eagles scored their first and only touchdown of the day with 2:50 left in the first half off of a four yard touchdown pass, making the score 23-7.

DeRousse made a 22-yard field goal just before halftime, giving the Wildcats a 26-7 lead score going into halftime.

Woods ran in his second rushing touchdown of the day with a nine yard run, the extra point was made by DeRousse, pushing the Wildcat lead to 33-7.

The final score of the day came with just 0:16 left in the fourth quarter with a 16-yard touchdown pass from Marco Aguinaga to Kwan Brooks. After the extra point, the final score was 40-7, Wildcats.

The explosive Wildcat offense had 419 total yards of offense, led by their passing game. The Wildcats had 267 passing yards, 81 of those yards coming from running back, Woods. Aguinaga had an impressive day going 17/24 with 186 yards through the air.

The Wildcats travel to Atchison, Kan. on Nov. 7 for a big matchup in the Heart of America South Division to take on the 6-1 (3-0) Benedictine College Ravens at 1 p.m.