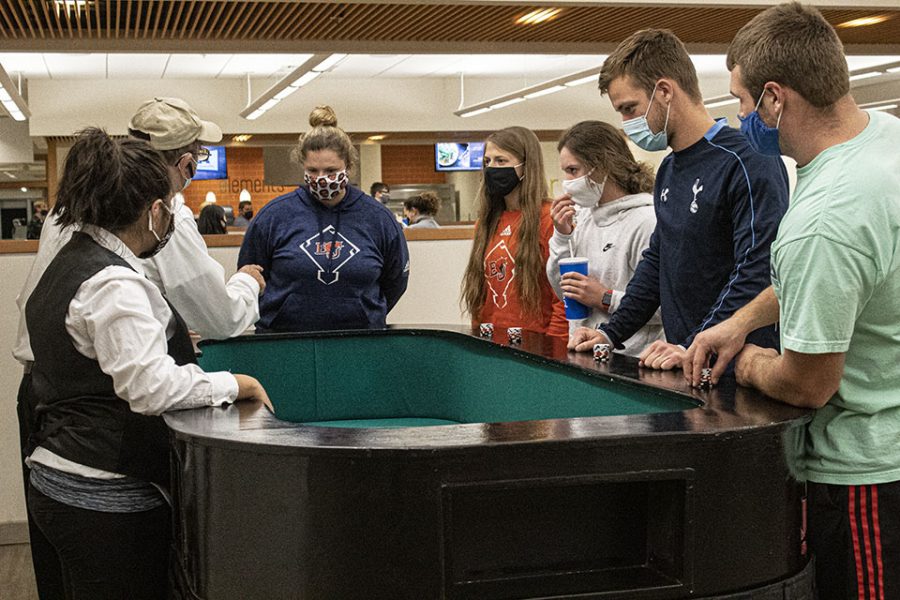 Students gather around a Craps table ready to play.

Prizes included Chromecast, a Roku TV, wireless speakers, an iced coffee machine, chargers, water bottles, papasan chairs and more. Prior to the event, SAC voted as a group on what prizes to include and then paid for them out of their activities budget.

Games, like Craps, Poker and more, were available for students to play in groups. Participants would play to win (or lose) chips. When a game finished, they could choose to keep playing or cash out their chips for tickets. They would then take the tickets and enter them into a raffle for whichever prize(s) they wanted.

Freshman Cristian Parada showed up to the event to take advantage of the free food after soccer practice, but he ended up staying for an hour and a half playing Craps. Craps is a betting game with dice. At one point, Parada bet all of his money on his teammate rolling a nine. His prediction reigned true when his teammate rolled a nine, making Parada win a stack of coins. This led him to earn a large amount of tickets to then put into raffles. By the end of the night, Parada had won the Roku TV.

“I am happy with the TV,” Parada said. “My TV stopped working a week before, so it was perfect timing.”

When Freshman Taylor Nicholson heard about Casino Night, she was excited for the opportunity to be social and have a great Friday night. She went with her roommate and met up with more friends there, who all stayed the entire duration. After playing Poker and racking up some tickets for the raffles, Nicholson ended up winning a Papasan chair.

“I just enjoyed that there was an event to go to that was not on Zoom,” Nicholson said. “I liked playing the games, the food was good and I had a lot of fun. I hope they do more things like this in the future.”

With a total of 86 students in attendance, Casino Night had a great turnout considering the lack of normal social events due to COVID-19.

“I know a lot of people had a fun time because I could hear laughs and screams from across the cafeteria,” SAC Social and Cultural Issues Coordinator Jesse Gardner said.