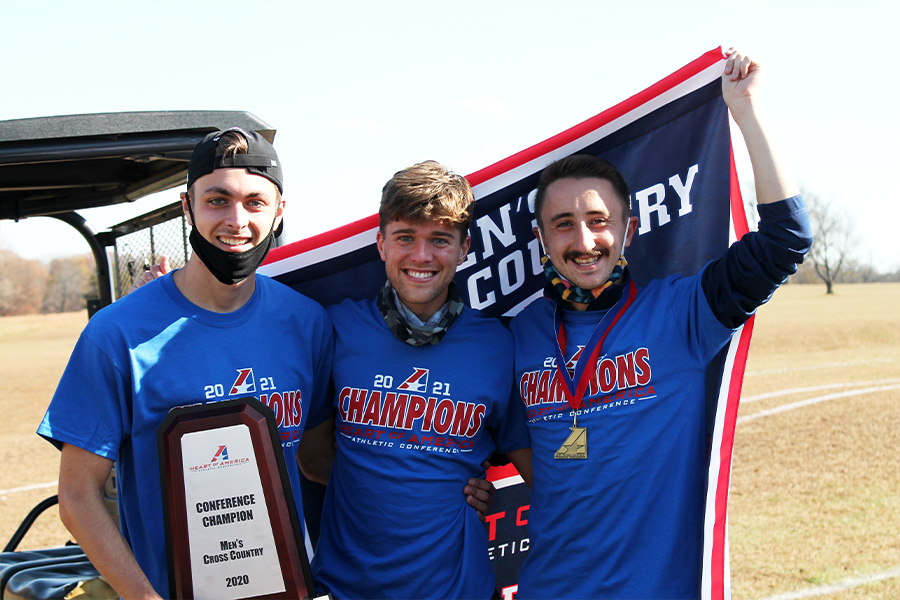 Seniors Grant Roesner, Drew Cook and Liam Barnsby pose at the end of the meet. Cook received honorable mention and Barnsby earned the title of All Conference.

Baker Cross Country teams had a fantastic weekend with a strong showing in the Heart of America Conference Championships. Both the men and women wanted to defend the “home course” in Baldwin City on Saturday. The men finished the day with their second consecutive conference title while the women came in second place. These placings were good enough to put both squads into the 2020-21 NAIA National Championships.

The national championships will take place in Cedar Rapids, Iowa on April 9th. Coach Tim Byers was complimentary of his teams’ efforts during this difficult time throughout the season.

The men finished with 31 points in the race, including the race winner in Sophomore Jackson Caldwell with a time of 26:09.52 minutes. In comparison, the Grand View men finished second with 94 points. The men also had four other runners finish in the top 10 of the race. Caleb Wright, Blake Nichols, Jacob Cofer and Liam Barnsby finished in the final positions of the sixth, seventh, eighth and ninth, respectively. The all-around team effort was enough for their second straight conference champion title.

The women finished with 71 points in the race including a sixth-place finisher in Senior Emily Chambers with a time of 19:52.72 minutes. The Benedictine women finished with 24 points in the event, which was enough to win the conference for the Ravens. The women also had another top-10 finisher in Junior Mia Wilhoit. The other Baker women that finished in the top-20 were Gracie Kopola, Jordan Smith and Jordan Hawman.

The strong showing by both the Baker men and women in the HAAC championships was a testament to the teams’ battle during this difficult time. The men continued their reign of the conference, while the women earned a spot in the next stage. Both teams will compete in the NAIA National Championship come April 9th in Iowa.