December commencement cancelled due to COVID-19 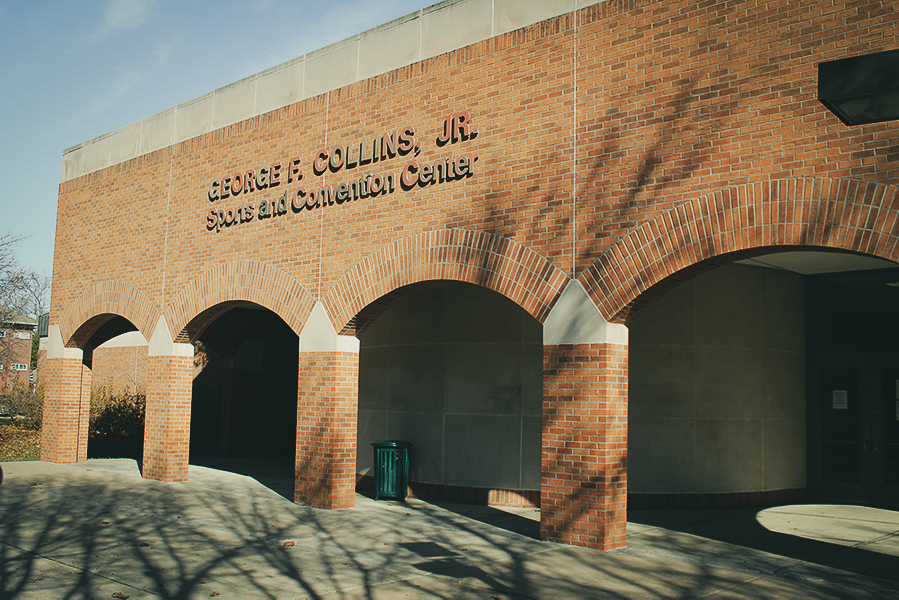 Collins Center has been the home for graduation ceremonies over the years. This year's winter graduation was cancelled in consideration for rising COVID-19 cases with hopes all previously cancelled graduations can be combined in May 2021.

For many students, graduating from college is a cause for celebration. Whether it is during the fall or spring semester, the graduation ceremony is a milestone that many students look forward to their senior year.

Unfortunately, the 2020 winter graduation ceremony has been cancelled. In a statement released by Baker University President Lynne Murray, available on the Baker University website, the decision was made in response to rising COVID-19 cases in Douglas County.

“In an effort to continue our positive trends, especially with the approaching flu season, it would not be responsible to invite a large number of people from across the country to an indoor event in December,” Murray said.

For the students planning to graduate at semester, such as Senior Drew Cook, the cancellation was not unexpected given the current situation.

“I was relatively unsurprised that the graduation ceremony was cancelled,” Cook said. “I feel that most people now expect gatherings of any kind to be somewhat tentative. Graduation is typically a gathering with tons of people, so I figured that it would be postponed or cancelled.”

Despite this, it has not prevented some members of the graduating class from mourning the loss of their graduation ceremony.

“It was expected, but I was disappointed just because everybody wants to have their graduation,” Senior Brandon Lewis said. “I mean, we worked four years for this. We would’ve hoped that in the time they had, with COVID taking place, that they had a second option or a new venue where they could make it work.”

However, this semester’s graduates still have the opportunity to walk across the stage. According to Senior Carly Hassenstab, her graduation class has been invited back during the spring semester to participate in the graduation ceremony then.

“Everybody who was supposed to graduate and walk in December was told that we could walk in the May ceremony. We would only be allowed to have two other people with us,” Hassenstab said.

Last year’s spring ceremony was cancelled due to COVID-19. However, some members of this year’s graduating class are still hopeful that the spring 2021 commencement will be able to continue on as planned.

“I think it’s more allowable to do it in the spring because then it’ll be outdoors at Liston Stadium, where people can social distance more,” Lewis said. “But right now it seems like they’re pushing things back as they go, and I hope they have a plan.”

If the spring ceremony is cancelled again, there is the possibility that the ceremony could be held virtually like it was last year. However, there’s still concern over losing the opportunity to have the graduation occur in-person.

“I’m fine with walking in May. But if the May one ended up being cancelled and there ended up being no ceremony at all, it would definitely suck,” Hassenstab said. “We worked really hard these four years to get where we are, and we want all of our friends and family to see us walk across that stage and get recognition through an actual, in-person ceremony.”

There is still some uncertainty that the spring ceremony will be able to continue as planned. But until then, seniors are looking for ways to privately celebrate their accomplishments before moving forward in their lives.

“Personally, my ‘graduation’ will consist of my family eating a nice meal together enjoying the company of each other before I head off to chiropractic school in the spring,” Cook said. “While I would have liked to have a normal college graduation, I am still appreciative that I was able to come back to campus this semester in the first place.”