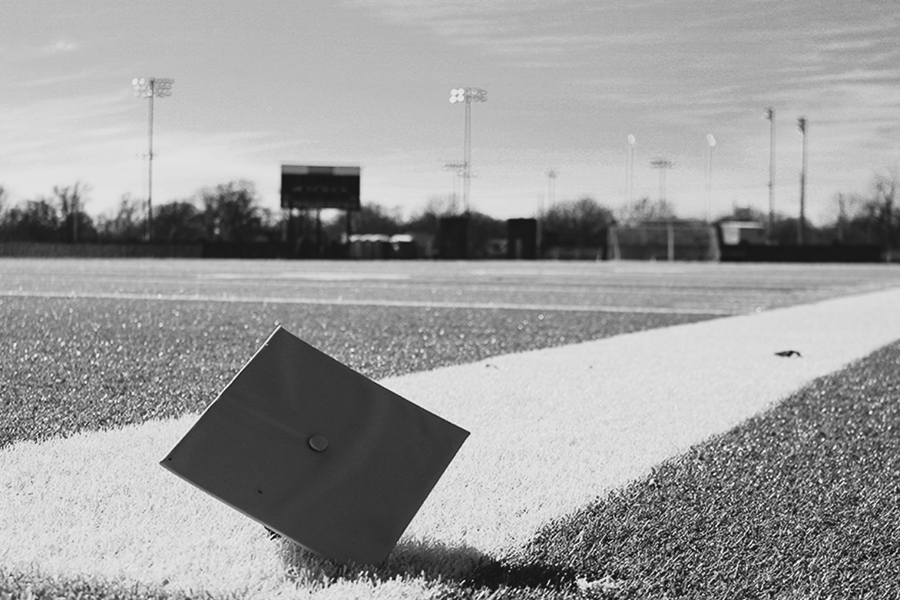 Senior athletes were unable to be accompanied by family or friends as part of "Senior Night" recognition in the wake of the pandemic.

Senior student-athletes could have never expected their last seasons would be framed around navigating a pandemic. Missing out on team bonding experiences and having games canceled and postponed were only two of the difficulties athletes faced during the fall 2020 athletic season.

The spectator policy for athletic events only allowed Baker students, staff and faculty to attend games in person, which resulted in families having to watch every game on livestream video. To honor the seniors who led their teams through unprecedented athletic seasons, many were hoping families would be permitted to attend in person for one special day: senior day. But that was not as simple as it had seemed.

Baker University President Lynne Murray sent a campus-wide email out on Oct. 23 outlining the spectator policy for senior day games. Each senior athlete was allotted two tickets for parents or other family members to attend their senior day games in person.

Families had tickets emailed to them and sat in the visitor side bleachers on game day. They were required to have their temperature checked, wear masks and social distance in the bleachers. This policy was only in place for senior recognition days, ensuring that all other game day rules were still in effect after the special occasions were over.

After a season playing in front of empty crowds, seniors were ecstatic to have their loved ones in the stands and families were excited to watch their athletes compete in person.

Though seniors were grateful for this opportunity, they were disappointed to learn they would not be able to walk out onto the field or court with their families for senior recognition — a tradition that has always been special for both players and their loved ones.

According to Athletic Director and Men’s Soccer Head Coach Nate Houser, the decision to only allow two loved ones per player was mainly based on seating capacity. The university wanted to fit everyone in while keeping in accordance with COVID-19 policies. Maintaining six feet of social distancing becomes challenging when the amount of people in attendance is larger.

While other schools in the Heart of America Conference were allowing outside fans throughout the whole fall athletic season, many people wondered why Baker University refused to do so as well. Baker athletes were hoping a better exception could be made for senior day games, but Houser believes he made the right call.

“We cannot control what people are doing outside of Baker events, but we can control what happens inside our facilities, so I think we ultimately made the best decision for Baker’s safety,” Houser said.

After the games ended, families were asked to leave the stadium or court without any contact with players. Even though families and student-athletes were advised to go outside of the venues to converse in close contact, Baker has no control of what people do once they leave.

Due to game cancellations and postponements, players were not sure which day their senior day games would be. Dates were constantly changing and players could not get a definitive answer soon enough to allow families to plan comfortably.

Senior Monique Diaz’s family was not able to fly in from out of town for her actual senior day because of the short notice. Her parents and siblings have never been able to see her play college soccer in person since she has moved to Kansas, so having them present for her senior day game would have been perfect.

“I feel like the decision was a bit inconsiderate of the people who live out of state and may have a hard time getting off work or getting a flight booked quickly,” Diaz said. “I would have been a lot happier if my parents were there.”

Because the Heart of America Conference men’s and women’s soccer conference tournaments and national tournaments have been moved to the spring of 2021, senior day was not Diaz’s last game. She hopes there are more opportunities for fans to attend games in the spring.

Senior Sophie Heldenbrand experienced bittersweet feelings. Though her mom and dad were able to attend her senior day volleyball game in person, she had so many loved ones that wanted to be there too, including her step-parents. She felt the decision to only allow two people was particularly discriminatory toward players with two sets of parents.

Nevertheless, seeing her parents in the stands while being recognized as a senior caused her emotions to surge.

“There were so many people I wished could be there because my whole career came down to that one moment,” Heldenbrand said. “It was the end of something that has made me who I am: the friends, the memories and the experiences.”

Having the senior families there proved to be the boost the team needed during that senior day game against Park University. Heldenbrand felt her team played the best they ever had.

“We played together as one and it was so refreshing. We finally got back to the team we truly are,” Heldenbrand said.

The Baker University spectator policy has since changed again to prohibit any fans, including Baker students, staff, and faculty, from attending games in person due to rising positive COVID-19 cases in Douglas County. A campus-wide email was sent from President Murray’s account on Nov. 13 to alert everyone of the change.