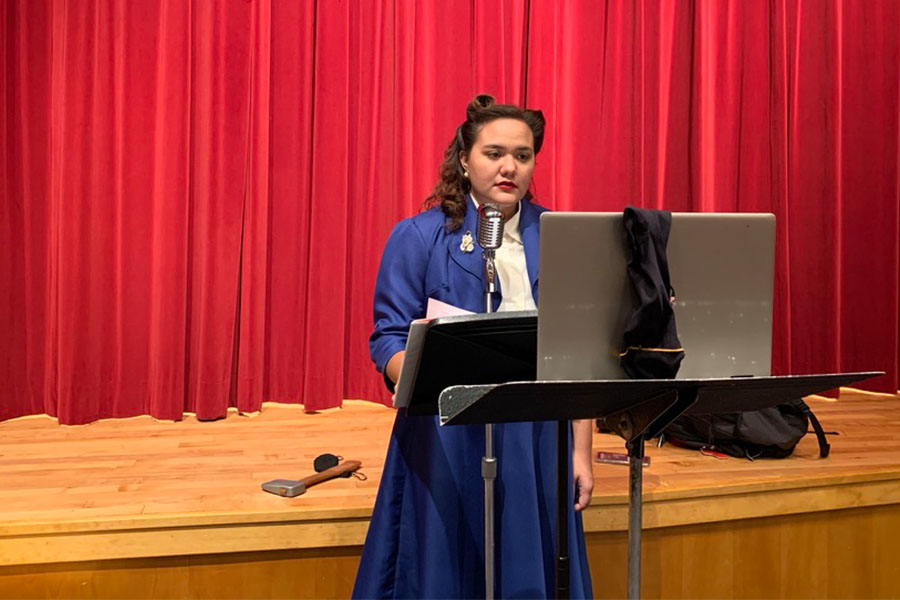 Sophomore Shayla Garcia staying in character during her performance.

During the COVID-19 pandemic, the fine arts communities have been vastly affected. Figuring out how to socially distance on stage, wearing masks and performing without audiences have caused struggles, but the Baker University theatre program found ways to navigate.

For its last event of the semester, the Baker theatre program hosted performances from Nov. 12 to Nov. 15 with a show on each night. Entitled “Baker Theatre Live on the Air! An Onstage Radio Play,” they prepared two different themed shows. The themes were inspired by 1940s radio dramas. “Mystery Night” was held on Nov. 12 and Nov. 14, which “Sci-Fi Night” was held on Nov. 13 and Nov. 15.

Mystery Night featured “Ellery Queen” and “George’s Christmas Present,” while Sci-Fi Night featured “Flash Gordon” and “Miss Brooks’ Thanksgiving.” Both were original scripts from the 1930s and 1940s found in an archive of old scripts.

A common theme in old radio shows was that there would be an opening act featuring a standup comedian or a comedy sketch, so the cast did just that.

Finding creative ways to entertain and relate to the audience came naturally. After the opening, they would begin the bulk of the show. In between sketches, they would interrupt with “commercials” in which they would creatively promote local businesses, like The Nook, Late Nite, Homestead Bakery and The 8th Street Burger Shop. Then they would jump right back into the sketch.

Performances were streamed live on Baker University Theatre’s Facebook page. With this particular performance, actors played multiple characters which caused them to have to switch back and forth between personas.

Preparation for in-person shows consisted of conducting most rehearsals online and spacing out the microphones eight or nine feet apart on stage in Rice Auditorium for social distancing when rehearsing together. They went out and bought period microphones and Assistant Professor of Theatre Emily Kasprzak customized costumes to fit the classical theme.

Unfortunately, as opening night neared, the theatre program was forced to quickly decide to move the shows to an all-online platform rather than have a live audience in Rice Auditorium.

Due to multiple members having to quarantine or self-isolate within the span of three days, they had to band together to make the show effective over Zoom with cast members performing from multiple locations.

The main concern they had with doing a show on Zoom was timing, especially regarding comedy bits, because everyone needs to be on correct timing for jokes to land. Nevertheless, they had prepared themselves for this exact scenario.

Professor of Theatre Tom Heiman was the director and soundboard operator for the shows. He encouraged his students to just do the best they could and to have fun regardless.

“It seems like everything the pandemic could do to us, it did to us,” Heiman said. “But we picked this show for the exact scenario of having to do the show online all from different locations.”

With some members in their home states and cities, members on campus together had to improvise so that everyone could hear each other on the laptops. Two members were on Rice Auditorium stage and two members went to different rooms in Owens Hall.

Senior Kristina Taylor recorded jingles that played throughout the shows. Taylor also played a range of characters. After recording tracks several times, trying to get the balance right and editing them, she was proud of the final product.

“Even though I did not get to sing live, it made me happy to put something out there that I worked really hard on,” Taylor said. “It was so rewarding.”

Though it took some getting used to, the members ultimately had a successful four days of shows via Zoom. The actors brought the shows to life through screens and Heiman and Senior Ethan Holland discovered how to make the Zoom software and sound design technology work together. Heiman conducted the sound effects from his computer at home and Holland did the live sound effects from his home.

Holland put in background work because the performances contributed to his senior project for his Theatre major. Aside from helping with sound as a foley artist and playing a few small roles, Holland was a driving force for the creation of the performances.

Despite all the chaos, Heiman felt his students were resilient and ultimately grew as performers. Holland has big aspirations of continuing with theatre, specifically sound design, after college. This experience only strengthened his skill set and ability to adapt to stressful situations.

Overall, Holland enjoys the expression that comes with acting. This being his senior project, he felt bittersweet about his four years of being a part of the theatre program at Baker.

“Theatre is about opening eyes and minds and bringing people together,” Holland said. “You get to explore so many topics and situations you may never have to deal with outside of the theatre, and it’s amazing.”