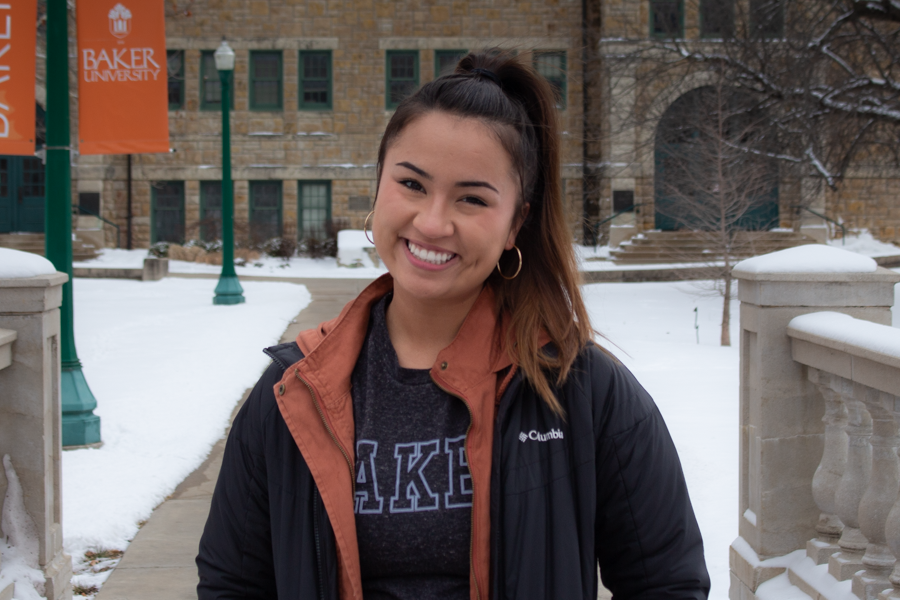 For many, college is a time to determine interests and to make lifelong memories before pursuing a career and joining the workforce. For Senior Jasmine White, her time at Baker University has provided her with some of her greatest memories while also preparing her for her future.

Before attending Baker, White initially planned on attending the University of Kansas, having even selected and met her roommates. White then experienced Baker for the first time when she and her mother accompanied a close friend on her campus tour.

“Her mom couldn’t go with her, so my mom and I went with her. Even though I was already accepted at KU, the community aspect of Baker is what sold me. I loved the feeling I felt while on campus,” White said.

Baker seemed to be a perfect fit for White to thrive.

White saw college as her opportunity to become involved, with a goal of making positive change on campus. Throughout the last four years, White has been involved in and has contributed to many organizations.

White served as Student Body President for two consecutive terms but always looked for more involvement. She is a member of Mungano, worked for the athletic training program, was a mentor for BK100, was a University Admissions Assistant and a part of Baker’s Kansas Young Democrats Club, along with giving her time to other activities.

White will graduate in May with a degree in Biochemistry. While she initially planned on attending medical school to become a doctor, White now plans to attend Physician’s Assistant school. She has aspirations of working in urban medicine and dreams of working for Doctors Without Borders.

White has lifelong memories thanks to her time at Baker. White says that one of her favorite memories of her college experience has been attending Student Activities Council’s Grocery Bingo events. Although she has never won, she loves the feeling of pure joy that radiates from those who do win.

White has many other positive college memories, many of them involving her good friends. White’s close friend, senior Abby Bird, has shared many positive experiences with White.

“This past semester we had brunch and went to the football game to watch Jasmine be crowned for royalty,” Bird said. “We do things like this all the time – plan things just for people to be together and have a good time.”

While also being a time for making memories, White has advice for prospective college students: to be true to themselves.

“In college, you get to be picky and do all the best things for yourself. Make sure that the college story that you write is one that you’d like to read in four years. Write one that you genuinely want to read and be proud of,” White said.

Although White is not ready to graduate in May, it is not because she feels unprepared to become an independent adult.

“College has given me the skill set to achieve and be successful but having to do that on my own is going to be a bit different,” White said. “I am ready to leave here professionally, but not on a social level.”

Bird, also a soon-to-be graduate, agrees with White that Baker is a special place.

“There is so much comradery around being a Wildcat, it’s really special,” Bird said. “Academically, I think the professors go beyond the normal to help you be successful.”

A large inspiration for White has been Associate Professor of Education Dr. Amy Wintermantel.

“Dr. Wintermantel has had a very active role in me doing things that make me happy,” White said.

White is greatly appreciative of everything that Dr. Wintermantel has done for her, in making a positive difference in her life.

To Wintermantel, White is “a ray of sunshine on a chilly day.”

Wintermantel’s biggest hope for White is, “that her desire to elevate and encourage the down-trodden, notice those that others may pass by and heal the sick; all come to fruition as her intellect, optimism and jovial spirit merge into a force for goodness.”

“I don’t want to plateau, I want to continue making great memories throughout my life,” White said. “I want my life to keep going up.”