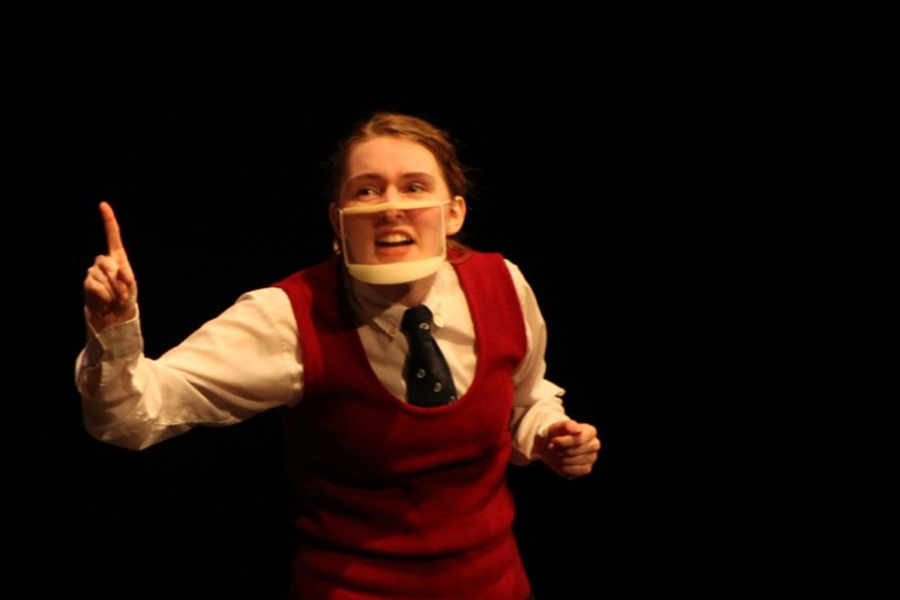 The Baker University Theatre Department is bringing a modern comedic twist to an old tragedy with the production of “Women Playing Hamlet.” This play composed of four actresses playing a total of 18 different roles will have you thinking about Shakespeare while bringing laughter to the auditorium.

In Shakespeare’s era, all the female roles were played by males, which sheds an ironic light on ancient acting standards given this all-female cast. The main character of Jessica, played by Kenzie Kuhlmann, struggles to live up to the pressure of playing the role of Hamlet. Through the process, she answers her most critical question, “to be or not to be?”

This particular show is special, as it is Associate Professor of Theatre Tom Heiman’s last directed show after 17 years at Baker University. Heiman initially selected this show unaware of its ties to a local theatre.

“It was originally produced at the Unicorn Theatre right here in Kansas City and I didn’t realize it until I fell in love with it. It’s nice to do a local show that’s this well put together,” Heiman said.

Heiman has been an important element in the success of the theatre department since first starting at Baker University. Heiman shared his passion in ways that would not only entertain individuals but also help others.  The shows Heiman was a part of like “New York” helped raise money for firefighters and policemen involved in the 9/11 attack.

“The God Committee” was another memorable production for Heiman as the plot was about organ donation and helped audience members register to become organ donors. These shows not only entertained but established a call to action that actively bettered the lives of others.

Senior and Stage Manager Ethan Holland reflects on his time having Tom as a theatre professor and director.

“He’s a really fun guy to work with. He and I both think very similarly sometimes so we can just bounce off each other and share ideas and have good conversations,” Holland said. “I love working under him because it’s never a dull moment with Tom.”

Heiman’s dedication to theatre is brought out in many ways during this show in order to make the most of his last directed play. Heiman hopes to see growth in his cast and design team but also wants the audience to have a good experience with this show.

“I want the audience to have a lot of fun,” Heiman said. “People that come to this show, we actually ask them to answer questions. We want audience participation in this one.” Heiman enjoys shows that break the fourth wall and hopes the audience will enjoy it as much as he has during rehearsal.

COVID-19 has impacted the theatre department greatly as this is the first play that has been put on stage in front of a live audience in over a year.

“It’s been interesting to see where the rust has been on me as well as on my crew,” Heiman said.

Sophomore Sidney Alaimo plays eight roles in the show and has found it interesting acting on stage during COVID-19 restrictions.

“It’s kind of weird in that regard knowing that there’s definitely going to be a reduced amount of people watching you to begin with,” Alaimo said. “It’s also interesting with masks and a social distanced cast because usually you’d be in closer quarters and playing off of each other more, it’s just a new way of navigating.”

Alaimo has enjoyed what this small production has to offer. Alaimo says, “It’s fun that it’s a small play because you have more connection with the people, you’re working with so you can play off of each other more often.”

This show offers comedic relief while also adding in a more serious tone. This balance adds to the minutiae of the play’s elements.

“Women Playing Hamlet” will take place in Rice Auditorium at 7:30 p.m. on March 11 through 13 and 2 p.m. on March 14. Admission is only available and free for Baker Students with a university ID but can be viewed on-demand here.