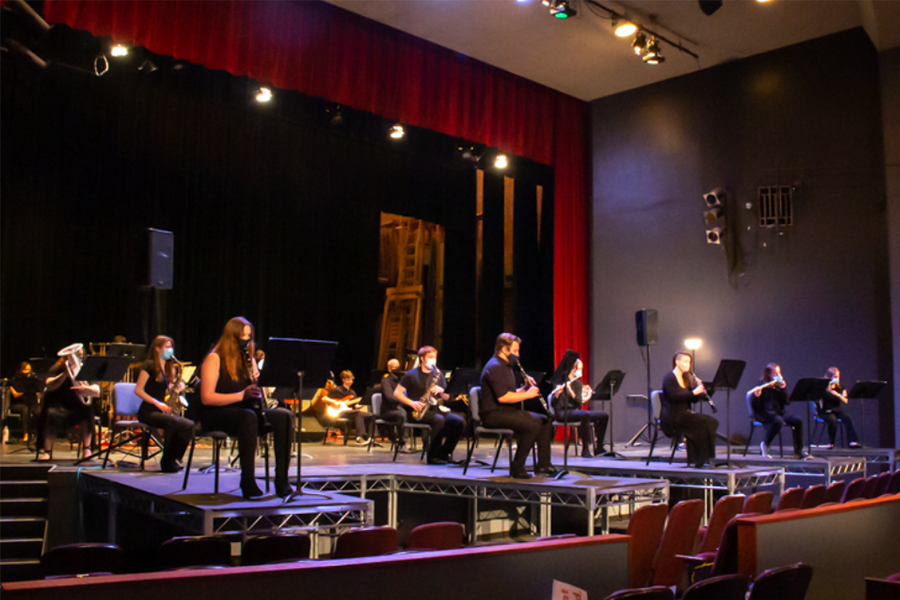 On Mar. 25, Baker University band gathered together to perform for a limited audience in Rice Auditorium.

On Mar. 25, the Baker University Symphonic Winds and Jazz Band held their first in-house concert in Rice Auditorium since the start of the pandemic.

Though they were able to have an outdoor concert last October, this was the first opportunity where the band was able to be on their own stage. However, only Baker students and faculty were able to attend due to social distancing concerns.

The concert consisted of five different pieces, both traditional and contemporary, for the Symphonic winds followed by a fifteen minute performance by the Jazz Band. Associate Professor and Director of Bands Frank Perez reflected on the obstacles they had to overcome to put on the concert.

“Normally we get four 50 minute rehearsals in a week; now we only get four half hour rehearsals,” Perez said. “And tonight, we had a 30 minute rehearsal with everybody, with all our students and guests, and that’s all we got to present the concert.”

In addition to time constraints, the band also had to adapt to a unique setup for their ensemble. Three platforms jutted out from the stage so all of the band members could sit six feet apart, and Perez had to conduct from the audience on top of an elevated platform.

“In our typical rehearsal opportunities, we sit in the audience and Dr. Perez and the percussion are on stage,” Senior Clarinet and Tenor Saxaphone player Jesse Bentz said.
“We just got on stage yesterday, so that was a crazy experience to see all the jutted out platforms and how the band was distributed out. So it was more about making sure that the sound wasn’t affected or, if it was, that it got taken care of quickly.”

Junior Mason Dukes attended with some of his fraternity brothers to support their friends on stage. Realizing the different set-up for the band students, he was fascinated by the band’s performance.

Though in-person attendance was an option for students and faculty, there was also a Zoom link for other audience members to listen in virtually. Only about a dozen or so people arrived in the auditorium, but there was still a large attendance over Zoom.

“I think it’s important to be able to show up for people who are in band, because they put a lot of work into their craft,” Dukes said. “So is being able to have their parents there and have their friends show up to their concerts. I think it’s really cool that we’re starting to be able to get back into that.”

Still, Bentz was excited to be back on stage and with an audience, even if attendance was limited.

“The sheer happiness I get from getting to perform in front of people again is amazing,” Bentz said. “Music is just as much a physical experience as a mental one, emotional one or even an aural one. So being able to perform, even if for students and staff only, it was amazing to give people the ability to physically listen to the music and hear it themselves.”

At the end of the concert Perez felt that, in spite of the obstacles, the band had given a concert to be proud of.

“I feel like it went exceptionally well,” Perez said. “The fact that we’ve only had half the time makes me feel even better and more proud of our students. All the musicians put their best foot forward and our band rose to the occasion.”