“Save Our Fine Arts” protest held by Baker University Students 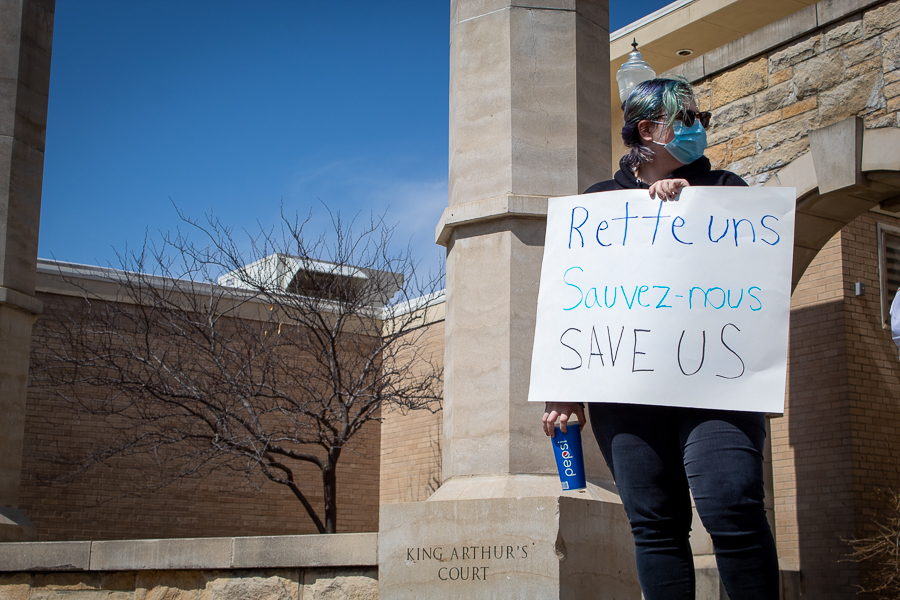 Sophomore Kathryn Harman joined the protest on the Hartley Plaza to show her frustration with recent cuts in offered majors.

Editor’s Note: It is our duty to disclose that Liam Flake, a Baker Orange staff member, was involved in organizing the student protest held on March 26. He did so in his capacity as a private citizen and not as an Orange representative. We support citizens’ rights to free and peaceful expression of ideas, which includes our staff. However, we recognize Flake’s private actions present a potential professional conflict of interest, and we’re committed to fair and balanced reporting of the issues. As such, we have ensured that Flake was not involved in the reporting process as either a source or contributor for this article, nor any other Orange coverage related to reduction and reallocation and subsequent responses from the Baker community.

On Mar. 26, Baker University students congregated in Hartley Plaza to demonstrate their discontent with recent program cuts. This protest, under the name “Save Our Fine Arts,” was organized to bring attention to the importance of these programs in a well-rounded education and support those who are affected by this decision.

Students of several majors came out to express their views in light of this announcement. Protest organizers held a sign-making event a few days before the protest so that students passing by could have the chance to prepare and use their own message.

Prior to the event, Dean of the College of Arts and Sciences Darcy Russell sent an email to the organizers, explaining key reasons as to why the university made these decisions.

Russell hoped to clarify why the university delayed announcing the cuts, citing that there were different levels of individuals affected and the university wanted to protect their privacy.

“We were working to share the information in the most sensitive way possible with the people most impacted first and then with the larger community,” Russell stated.

Russell also offered clarifying information regarding why they made the decision to cut the programs they did.

“In large part, these difficult decisions were driven by the enrollment patterns we have seen over the last 10 years,” Russell wrote.

Many of the cut programs were then listed to explain the percentage of students who have graduated with the majors being cut. These students make up anywhere from 0.1 percent to 0.8 percent of students over the last 10 years.

Students who participated in the protest did so to show support for those who are being affected by this announcement.

Although Senior Emma Smith is not directly affected by the recent cuts, she decided to show support by holding a sign stating, “arts are our future.” Smith is frustrated for those who are having to reconsider the courses they will have to take in the future, as well as prospective students looking into attending the university.

“What’s next at this point? I’m a psychology major and it could be psychology next. You never know,” Smith said.

Senior Jesse Gardner and Sophomore Kathryn Harman both came later to show their support on the matter. While their majors are not included in those that are being cut, both students have previously taken or are currently in French classes.

Gardner explained her frustration with the limited options of languages offered, although it has been noted by Russell and others that lower-level German classes will continue to be offered to students.

“[Foreign language is] definitely very useful, especially in the United States,” Gardner said. “I love that we offer Spanish, but I think that’ll deter a lot of students who took French or German or any other language in high school.”

Much like Smith, Gardner asked herself which program would be next should something like this occur in the future.

“I figured I would exercise my right on Baker’s campus to tell people how I feel about it,” Gardner said. “I’m fighting for those who have a smaller presence on campus.”

While protesters remain optimistic for a response from the university after their efforts, many realize the reality of the situation.

“I’m hopeful, but I don’t think much will happen, which is heartbreaking,” Harman said.

The protesters stressed the importance of transparency above everything else. Students who participated want to know where money is being allocated so they can decide for themselves if this decision was justified or not.

Harman states, “I hope the response would be accountability and allowing the budget to be viewed publicly and not hiding behind a wall of silence and actually talking about what they’re doing and why they’re doing it.”

Students continue to work hard in expressing the importance of a liberal arts education, and remain focused on demonstrating to the university that the arts matter, hoping to find more answers as time passes.