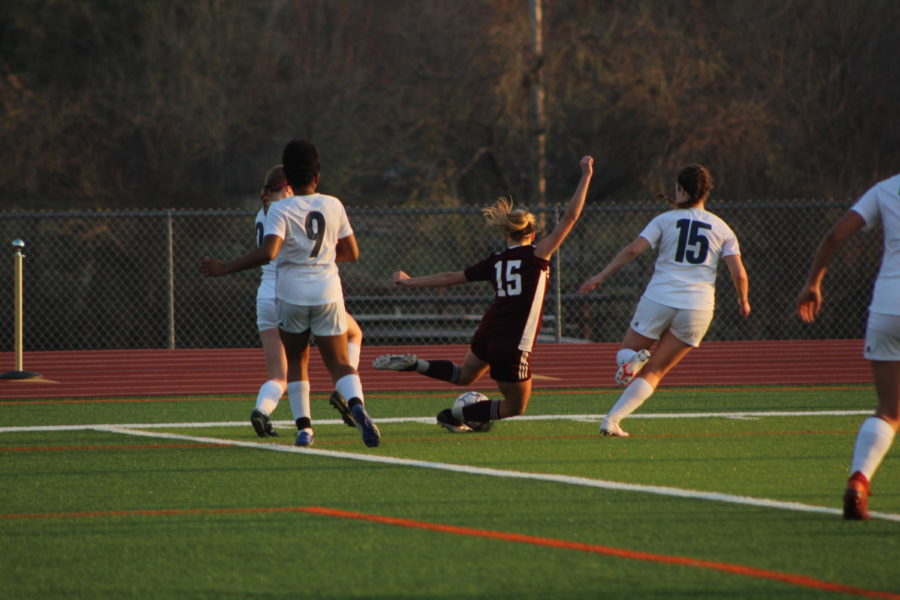 Junior Kaosi Ude and Freshman Cate Nearmyer compete with Envangel for possession of the ball.

Evangel gained a goal in the last nine minutes, bringing the score to 2-1, but the Wildcats managed to maintain their lead for the remainder of the game.

“Once we settled our nerves we were able to settle in and execute our specific plan, and it worked,” Head Coach Sara Matthews said.

The game represented the culmination of techniques that the team has been working on throughout the season. Matthews explained that the Wildcats excelled during the game in switching the point of attack and creating chances.

“It’s something that we’ve been working on throughout our spring. We created a lot of chances today and we were rewarded twice for it,” Matthews stated.

Furthermore, Matthews offered that the victory was key to the tournament in terms of momentum.

“Now the nerves hopefully settle in. It’s more about being confident and progressing through the tournament with that,” Matthews said.

One player who was noticeably active throughout the game was Sophomore Left Defender Anabella Wiles.

“I thought I put my body in front of the ball most of the time,” Wiles offered, explaining her role in the game. “I really just tried to give 100% to the team, as this is a playoff game.”

Wiles also provided her own insights as to the team’s keys to success for the game.

“I think that we just gave 100% all of the time, and we really moved the ball together as a team. I think that was the most important part of the game,” Wiles stated.

The team will face Missouri Valley College at Liston Stadium for the semifinals on April 7 at 7:00 PM.