The Baker Orange • May 2, 2021 • https://thebakerorange.com/36066/news/students-recognized-as-teachers-of-promise/

Students recognized as teachers of promise 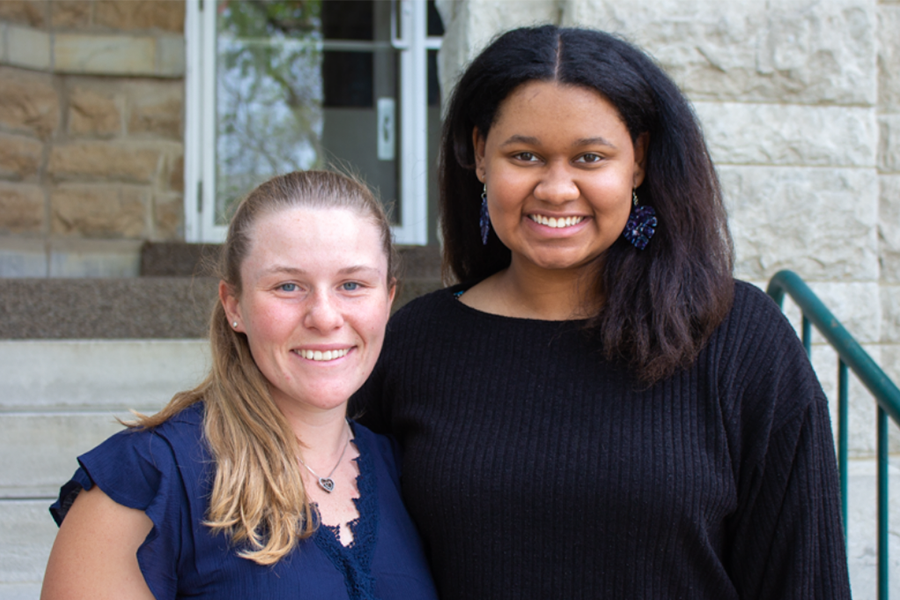 Every year, the Kansas Department of Education invites every university with a teacher preparation program to choose two students to be awarded the “Teachers of Promise” award.  Students who receive this award are given the opportunity to attend a conference that builds upon their skills as well as a certificate from the state. This year, Baker University recognizes Junior Patricia Moore and Senior Kara Smith as 2021’s Teachers of Promise.

Both future educators excelled in their own area of study. The two were informed of their success after a class with Dr. Charlsie Prosser, the department chair and associate professor of the school of education.

“At the end of class, [Dr. Prosser] was like ‘Alright I need to see Patricia and Kara in my office right after this,’” Moore said. “And me and Kara were like ‘oh my gosh, what did we do wrong?’”

Moore is currently studying as a secondary level physical education major. She remembers feeling called toward this path during her senior year of high school.

“I was taking all these physical education classes and tennis and I was really enjoying the environment. I didn’t used to be like that,” Moore said. “I just wanted to stay inside and play on the Wii. But when I joined tennis, I realized how much fun being physically active can be. I want to bring that to other kids where they can feel like they’ve found something they can pursue outside of school and be active.”

As for Smith, she is currently pursuing a degree in vocal music education. Unlike Moore, she had always grown up with music and knew it would have to be a part of her life. But one of the deciding factors behind choosing education is having more representation in schools.

“Growing up, I went to predominantly white schools, and there’s nothing wrong with that. I just know that sometimes when you don’t see anybody like you, it can feel lonely,” Smith said. “In my experience, it would’ve been helpful to have more role models and representation, even if it’s just as simple as being there and having minority students feel safe.”

Prosser, in addition to announcing their selection, also served on the committee that helped select Smith and Moore for the award. According to her, the state does not offer specific criteria on how to select each student and it will not always be based on the best grades.

“We don’t pick the top GPAs all the time, but we may use that to break a tie,” Prosser said. “We are really focused on relationships. How are they treating their peers while at Baker? Are they just coming to classes and doing the bare minimum? Are they involved in organizations?”

For both of the award winners, each excelled in their own unique way outside of their GPA.

Prosser helps with the School of Education Ambassadors on campus, of which Moore has been the president for the past year. Through this, she has seen her in action.

“She is very consistent and has strong leadership throughout,” Prosser said. “She has our meetings scheduled for thirty minutes to an hour. And those first thirty minutes are dedicated to team building. She really checks in and holds people accountable in a nice way. She’s going to bring those skills into the school and be a stronger teacher because of that.”

As for Smith, Prosser and the other faculty members of the school of education have had the opportunity to see her perform both as a singer and as a student.

“She’s just really talented in her craft,” Prosser said. “With those of us who’ve had her in class, her creativity and the way she approaches instructional planning is just fantastic. She really understands how to differentiate instruction. And I’m sure she’s been in bad moods before, but I’ve never seen it. She’s very bubbly and positive. She just brings this energy throughout.”

Now that they’ve been recognized as Teachers of Promise, Moore feels more secure about the next step in her education journey.

“I’m in pre-student teaching right now and I’m excited but also kind of nervous. Am I ready to student teach? Do I know enough? What’s it going to be like?” Moore said. “There’s so many unanswered questions. But this makes me feel more confident going into the real world, getting the interview and getting the job out of college.”

In addition to security, Smith feels like this will only give her a greater drive to succeed in the future.

“I want to do the best work and be the best I can be, and I think this will be a way to push me to be that best, especially as a first year teacher,” Smith said. “Because I know that’s one of the hardest things ― getting there and beginning. I’m hoping this will be the thing that gives me an extra boost and validation especially when I get to student teaching, because I might need it.”

Either way, Prosser is not worried about what the future has in store for these two Teachers of Promise.

“I just look forward to seeing where their careers take them and to see all the good they’re going to do in students’ lives and in their communities,” Prosser said. “I think they both have a very bright future in education, and it’s one of the joys I have after students graduate.”