What Were You Wearing? looks at survivor stories

SAAM was also recognized on campus through the week-long installation of the What Were You Wearing? exhibit in the Holt-Russell gallery, which was available Apr. 26-30. The exhibit featured stories from sexual assault survivors beside the clothes those survivors were wearing at the time of their assault. The display aimed to challenge the myth of victim blaming.

What Were You Wearing? and the stories featured was an idea originally created and compiled by the University of Arkansas in 2013. The gallery has been run in previous years at Baker. However, Gadd-Nelson, who is supervising the project for the first time this year, noted that the exhibit would be somewhat different.

This time, she explained, BRAVE had been able to receive funding from Student Senate, which allowed the organization to buy supplies and make further promotional materials for the gallery. These funds were used to purchase clothing and create high quality signs, which Gadd-Nelson stated were key in making the gallery look “really polished and really well thought out.”

To create the gallery, BRAVE first collected stories from installation resources provided by University of Kansas.

“We looked through the stories, trying to figure out which ones would resonate most with folks here at Baker,” Gadd-Nelson stated.

With stories selected, the organization then set out to find clothing to use for the exhibit. Clothing featured was drawn from previous iterations of the event, as well as Goodwill and from the school theatre department with the help of Assistant Professor of Theatre Emily Kasprzak.

“We just really wanted to make sure that every outfit, every story, was really thoughtful and really intentional,” Gadd-Nelson said.

After stories and appropriate clothing were lined up, outfits were laid out, double checked and adjusted as needed. In the week before the opening of the exhibit, the outfits were set up in the gallery with the assistance of Assistant Professor of Art Russell Horton.

Gadd-Nelson also credited her intern, Belinda Flores, as an integral help in the creation of What Were You Wearing?

With the gallery, BRAVE aimed to bring awareness to the experiences of sexual assault survivors and thus foster education and discussion on the topic.

“Our goal with the installation is to share survivor stories. I think that’s a powerful way for us to learn about sexual assault, to hear it from people who have experienced it,” Gadd-Nelson stated. “It was just such a striking visual, and we wanted to give this as an opportunity to allow people to reflect on survivors’ experiences.”

The exhibit features a myriad of these stories, spanning a wide range of demographics and experiences. In turn, the gallery was intended to provide a space for appropriate reaction to these accounts, whether it be grief, validation or pride in the strength of survivors.

“We just wanted to create that space to engage in those stories, and just really focus on the importance of believing survivors,” Gadd-Nelson explained. “I think people could probably have all kinds of different feelings when they see this exhibit. I think that it could bring up feelings of sadness, anger or grief. I don’t think there’s a right or wrong way to react to it.”

As a display that touches deeply on sensitive subjects, the exhibit is one that indeed is liable to stir up emotional reaction for many.

“We have seen a lot of people commenting on the fact that we have children’s clothing in the story. And I think that has really struck some people, that they maybe didn’t anticipate the story to include children’s experiences,” Gadd-Nelson highlighted.

Ultimately, however, it is the reaction to the gallery that allows it to achieve its purpose, both in encouraging change and providing support for survivors.

“I would hope people see this and feel moved to make a difference in our community. For people that have experienced sexual assault, I would hope they would walk away from this exhibit with a sense of community and not feeling alone, that this is something that unfortunately happens to a lot of people in our community,” Gadd-Nelson stated.

Among the sets of clothes in What Were You Wearing were a couple that featured Baker University sweatshirts. These, Gadd-Nelson clarified, are derived from the original stories gathered by the University of Arkansas and not representative of Baker student stories. The accounts, she stated, describe a generic university tee shirt in their description, and many universities include their own school sweatshirt for the display.

“I think that’s to get to get people thinking about these stories that absolutely can and have happened here at Baker and in Baldwin City,” Gadd-Nelson clarified.

However, while the current exhibition features stories from across the nation, Gadd-Nelson explained that future years may be able to feature Baker-specific stories. To achieve this, the gallery features an option where students can provide their own experiences to be used in coming years.

To anonymously and confidentially submit their story, students were able to either write it out on a slip of paper to be placed in a locked dropbox or use a QR code to access an online link. The lockbox (and the submissions it contained), was then collected at the end of the week to be stored securely in Gadd-Nelson’s office.

“Next year we can really start to expand and deepen the meaning of the gallery by talking about Baker-specific stories,” Gadd-Nelson offered. 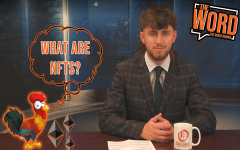 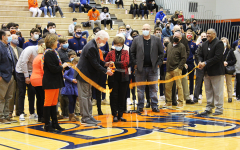 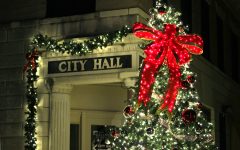 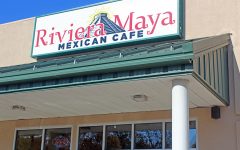 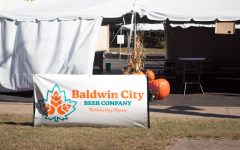