The Baker Orange • May 12, 2021 • https://thebakerorange.com/36203/news/baldwin-city-mural-committee-plans-murals-to-promote-tourism/ 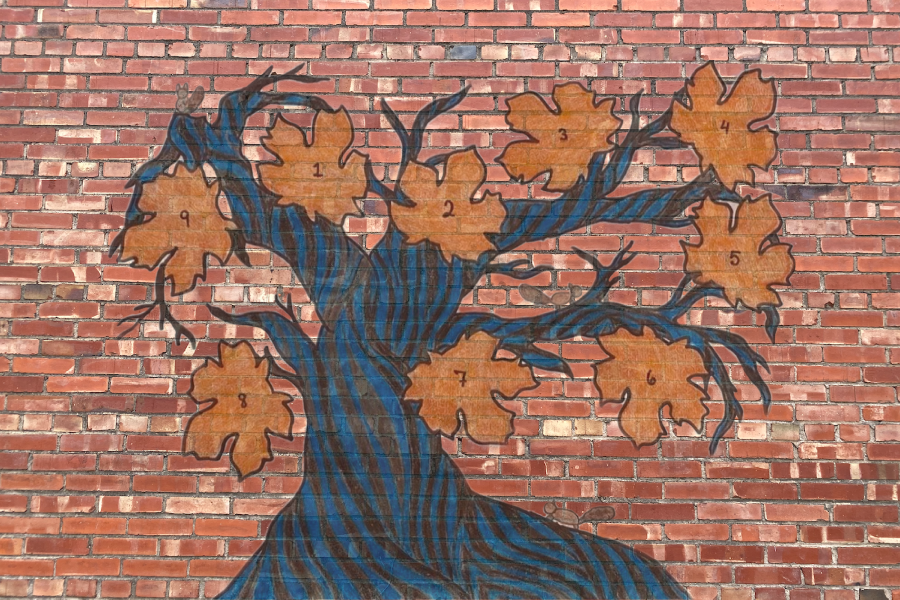 The new mural downtown is designed with Baker's student life in mind.

In 2017, the Baldwin City mural committee was formed to help promote tourism and increase economic activity. A new mural depicting the history of Baker University is planned to be the latest addition to the growing number of murals around Baldwin City.

Director of the Lumberyard Arts Center Jeannette Blackmar has helped with the committee since its inception.

“We started the idea as an economic development tool, as well as sharing Baldwin’s history visually to both residents and visitors to the community,” Blackmar said.

The latest mural, entitled, “Baker Family Tree,” was an idea created by Baker University Junior Elena Stephen as part of the Color My World class.

The design of the mural was created with Baker’s student life in mind.

“She features a tree that resembles a maple tree with leaves cascading around. Inside each leaf is an illustration that represents an aspect of student life on Baker,” Slavin said.

The murals painted as part of the program are designed to showcase Baldwin City history. Stephen’s design was selected out of many submissions.

“Elena’s design was selected by faculty and staff and voted as the favorite by the board of trustees,” Blackmar said. “She worked to see the implementation as the creator of that design and her interest in wanting to continue to be a part of the project.”

Currently, there are three finished murals that were completed between 2016-2019. The program’s goal is to have eight to ten murals completed and have them be the center of a mural walking tour through downtown Baldwin City.

“The tour will focus on the murals themselves, which will feature the artist and showcase the image and the apprentices, with a description of the mural,” Blackmar said. “Each of the murals has to depict some aspect of Baldwin City’s history.  Some of the murals will depict some untold stories, such as Lucy Sullivan or Luke Taylor.”

The process of creating and implementing a mural has various stages and is designed to have community input and participation.

One of the first things the committee did when formed was walk around downtown and identify wall spaces that would be a good place to feature a mural. Then, the property owner’s permission had to be secured to see if they would be interested in having a mural.

“The process is basically what would make the best canvas, quality of the wall and location of the wall,” Blackmar said.

All of those things must be determined before a final space is selected. The mural being painted also plays a role in determining the location.

“The mural has to be a good match with the building.  Such as the train mural, as it should be long and narrow, like the train itself, so we look for a building with those elements to match the direction of the mural,” Blackmar said.

As for the artistic process, Slavin is familiar with how to make a mural turn from a vision into a reality.

“I was a lead artist for one of the five mural benches that were placed in Sullivan Square in 2020. My team’s mural bench is named ‘Evolving Pathways,’” Slavin said. “We involved scenes from Baldwin City’s history such as the natives who lived here prior, the Signal Oak and the Palmyra well and told the story of the Sesquintennial.”

The social injustice that was a source of many protests in the summer of 2020 was also highlighted.

While the reason behind the murals was intended to stimulate the economy and increase tourism, Blackmar believes murals offer something unique to Baldwin City.

“They bring vibrancy, color, interest and wonder and a sense of awe.  I think murals and art beg questions, and one question leads to another and it is a sense of learning and knowing and enjoyment,” Blackmar said.