The Baker Orange • May 17, 2021 • https://thebakerorange.com/36232/showcase/resident-evil-village-exquisitely-crafted-but-light-on-horror/ 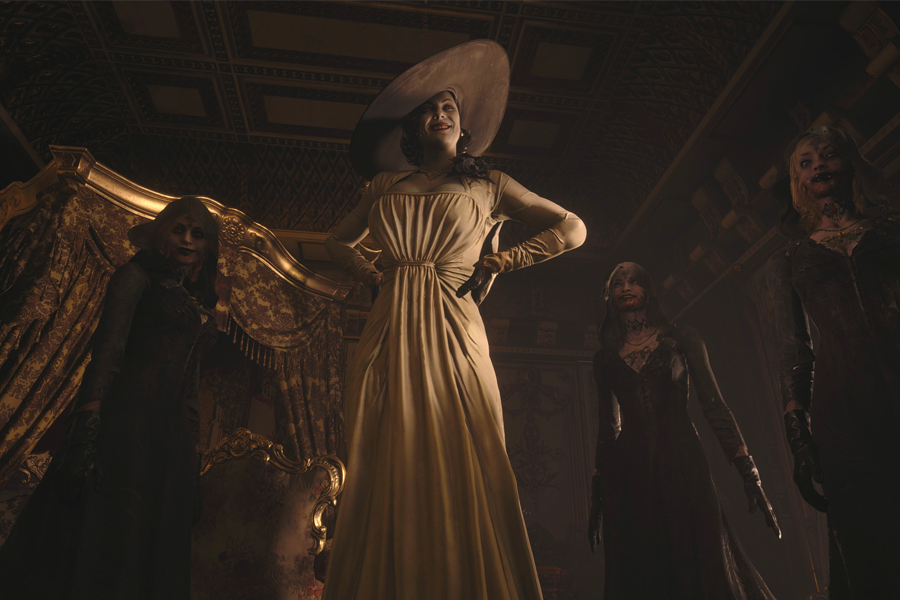 Lady Dimistrescu (center) and her three daughters Daniela, Cassandra and Bela (Left-right) capture their victims and drink their blood.

Taking place roughly three years after the last entry, the previous protagonist, Ethan Winters, returns as he navigates a dangerous European village. The village is run by a mysterious woman, known as Mother Miranda and her four “children” also known as the four lords.

When the seventh game was released back in 2017, it served as a return to form for the franchise, following several lackluster releases. While the fifth and sixth entries were heavily criticized for throwing away the horror in favor of action and guns, the seventh game was a pure horror game, similar to the first few games in the series.

Like the seventh game, the eighth entry chooses to utilize a first-person perspective, which was positively received, despite getting mixed reception during the initial promotion.

Despite its predecessor being a straight-up horror game, “Village” is not nearly as scary. Despite having some wonderfully tense moments and beautifully crafted villains, the game often leans a bit too much into gunplay.

This is not to say that the game is not scary at all. Although it lacks the scare factor of the previous entry, a single section of the game is arguably one of the scariest and most disturbing sections of a big horror game in recent years. It was so creepy I had to take a break. Despite this one section, the rest of the game is not all that scary.

While it does lack in overall scares, the game is extremely well-crafted with amazing visuals and beautiful, diverse environments. This is a nice change from the single location from the previous game to an extensive location of castles, villages, houses and factories. The gameplay is quite smooth, with the combat never being horribly difficult or too choppy.

The game itself is broken up into about five sections, with each section ending with a different boss fight. Each section of the game is devoted to each of the four lords of the village, Dimitrescu, Beneviento, Moreau, Heisenberg and the mysterious woman, known as Mother Miranda.

While the seventh game had boss fights with the same characters multiple times, the eighth game has a variety of boss fights with each of the different villains. The game being in strict sections takes away from the overall cohesion, as the sections often feel overly isolated with little overlap between one another.

Each of the four lords is extremely interesting, with amazing design and originality. Despite each of the four lords being great and unique characters, the game never devotes enough time to any of them. The entire time, I was wishing that I could spend more time with each of them, learning more about their lore and backstories.

Of the four lords, the standout is Lady Dimitrescu and her three daughters. Having been infected with a bio-organic weapon, Lady D stands at an impressive nine feet six inches tall. Her infection gives her a deep thirst for human blood, which she quenches by kidnapping people and killing them in her castle dungeon.

Lady Dimitrescu’s entire section of the game is impressive, with great performances, an incredible environment and an interesting backstory. It made me wish that more time was spent in this part of the game. Once I left the castle, the game never met that scale of impressiveness again.

Capcom has large amounts of missed potential that they can utilize for DLC chapters or in future sequels or spin-offs.

Each other lord is interesting as well, but nothing matches how intriguing castle Dimitrescu and its residents are. With all four lords being very interesting and well written, the main villain of the story, Mother Miranda, is quite underwhelming. This problem might have been solved if Mother Miranda had been taken out of the game with more focus on the four lords.

Overall, “Resident Evil Village” is another strong entry in the franchise, showcasing many new and interesting characters and expanding the lore. While the game itself may not live up to its predecessor in terms of horror, it does well to set up sequels and spinoffs. “Resident Evil Village” is a fun and tense game with lots of reasons to replay, with exquisitely crafted visuals and gameplay. The moment I finished my first playthrough I booted up a new save file to play again.