The Baker Orange • May 20, 2021 • https://thebakerorange.com/36260/opinion/the-problems-associated-with-student-debt/

The problems associated with student debt 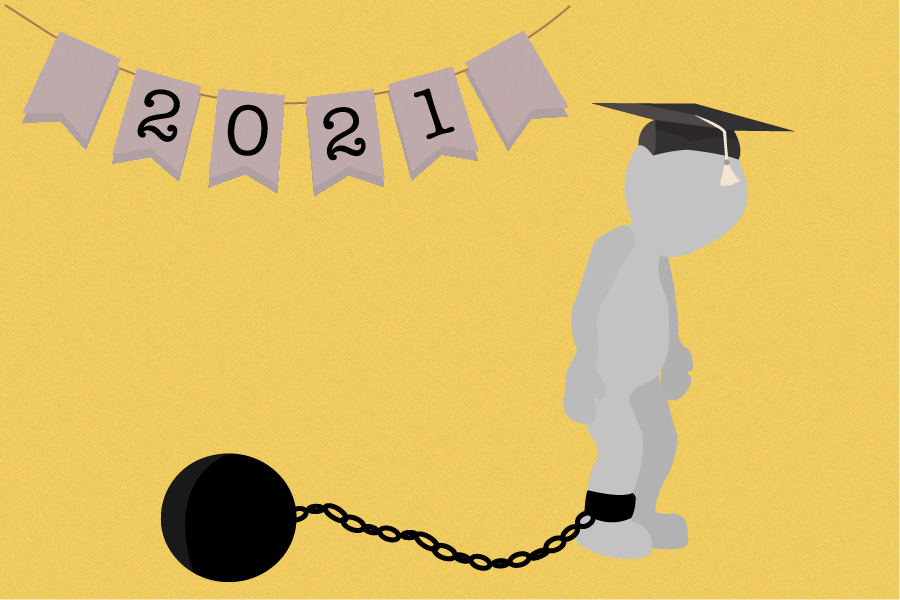 This number will only continue to grow unless the government or the collegiate industry itself identifies this issue and works to mitigate the economic damages caused by the growing amount of student debt.

Student debt on this scale is the worst it has ever been. This is due to the ridiculous inflation for both private and public college tuition.

As of 2018, inflation for the cost of earning a bachelor’s degree at a public university rose 213 percent from the 1980s. Keep in mind that this is only the tuition. For private universities, tuition inflation has increased by 129 percent in the same timeframe.

Now, the big question that needs to be answered is why the inflation rate for college tuition is so high. Inflation is normal, but the extent of inflation for tuition is a result of a broken system.

The piece-de-resistance of the whole matter lies in the fact that no one is sure what is causing the rapid increase in inflation rates.

Experts have examined the issue and some attribute the issue to the rise of administrative costs at universities being pushed onto the students while others look toward the decrease in state funding and how this has resulted in rises of tuition.

Whatever route of action is taken, student loan cancellation could cost an estimated 1 trillion dollars.

The main opposition to forgiving student debt is the cost. While the cost is inordinately high, if we truly believe education is the best way to improve ourselves as citizens and people, then we should ensure this right is guaranteed to all.

It is my belief that unless politicians want to start making education, especially secondary education, more affordable, they do not have the right to cling to education for bolstering their poll numbers.

Right now, getting your college degree is equated to burying yourself in debt. This reality stands in opposition to the very ideals of our nation. Yet, we stand in the fire and complain that it is hot. I say no more.

We love to promote the greatness of education, but the truth is that, for most Americans, that opportunity only comes around if you are lucky enough to get scholarships.

It is true that not everyone needs a college education to be successful in life. But it should remain a viable option for those who wish to pursue it. Everyone deserves an equal and equitable chance of going to college.

Why should education be commodified?

The creator of capitalism, Adam Smith, warned in his book “The Wealth of Nations” that capitalism can create a society where everything—including non-material items—is commodified and given a monetary value.

Smith wrote that “another bad effect of commerce is that it sinks the courage of mankind and tends to extinguish the martial spirit. Education is despised, or at least neglected, and heroic spirit is utterly extinguished.”

We must look beyond the artificial financial constraints that we have inflicted upon ourselves. We cannot keep accepting the current system as it is, we must demand action.

Gatekeeping secondary education, which is essentially what the current system does, only promotes a less-democratic citizenry who do not participate in government whatsoever.

If democracies rely on informed and engaged citizens to thrive, then we have become the architects of our own destruction.