The rise of K-pop in the United States 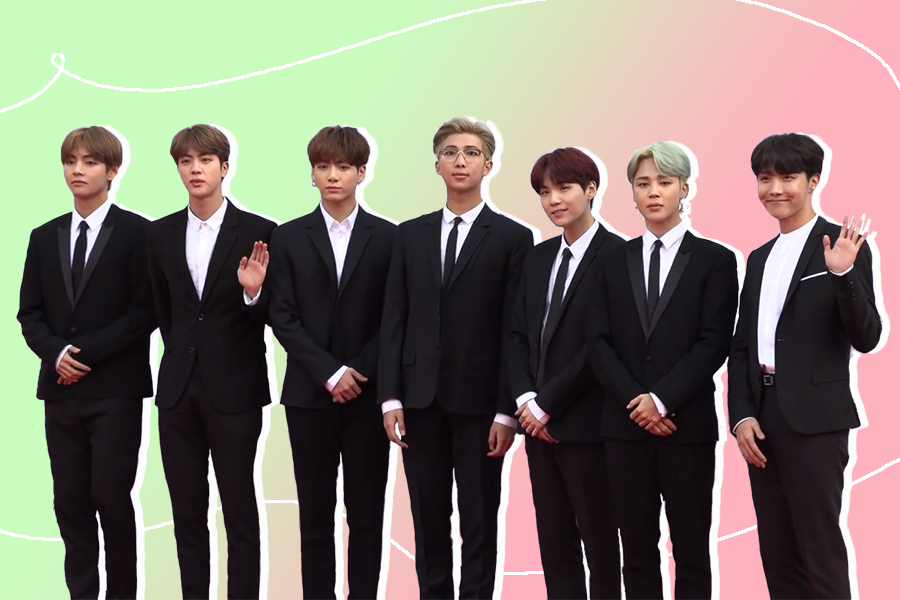 Smooth Like Butter. K-pop super group BTS is dominating the music charts in the U.S., making the group one of the most globally successful musical acts to come out of South Korea. Members include (from left to right) V, Jin, Jungkook, RM, Suga, Jimin and J-Hope.

Even though the summer season is coming to an end, that doesn’t mean the world will stop singing and dancing along to the music featured on Billboard’s Songs of the Summer chart. At the top of this list is BTS’s smash hit “Butter.” The upbeat and catchy song broke music chart records left and right, as it held its position as the number one song on the Billboard Hot 100 chart for more than eight consecutive weeks. Within just the first week of its release, the song garnered 289.2 million streams and sold 249,000 units.

BTS is considered one of the biggest musical acts ever to come out of South Korea. However, they are just one group under the K-pop genre umbrella. K-pop, a term short for Korean popular music, is a genre of music that combines various styles of music from all over the world while staying true to traditional Korean music roots.

While Korean popular music dates back to the late nineteenth century, the development of what we know today as modern K-pop began in the 1990s. During this time, Korean musicians began incorporating American musical styles into their music. Many drew inspiration from genres such as hip-hop, rock and electronic music.

“The production of the music is a mix of so many genres, so it is very interesting,” Senior Madison Vincent said.

Vincent first became aware of K-pop through her cousin and has been a fan of the genre ever since. She commented on the important message many K-pop groups spread through their music.

“The lyrics can be so intense and powerful and so many groups focus on self-love which I think is a great message to put out into the world,” Vincent said.

While K-pop is a large part of South Korean culture, it took a while for the United States to jump on the K-pop bandwagon. It wasn’t until Psy’s 2012 mega-hit “Gangnam Style” was released that K-pop had its big breakthrough in North America. “Gangnam Style” ranked number two on the Billboard Hot 100 list the year of its release and was the first video in history to reach one billion views on YouTube. Around the same time, K-pop groups such as Girls’ Generation made headway in the U.S., becoming the first K-pop group to perform on syndicated television.

Now, in the age of social media, K-pop has reached an even greater audience. Freshman Elijah Ballard said he first heard about the K-pop group Got7 on Instagram.

“What drew me in [to K-pop] was the culture shock and the [group] members,” Ballard said.

As K-pop groups like Got7, BTS, Blackpink, and NCT 127 continue to maintain their status as global sensations, there is some concern about the language barrier and the bands’ ability to reach foreign audiences.

“The language barrier has been a big issue in my opinion. When I tell people I listen to K-pop they often reply with ‘well why? You can’t understand what they are saying,’ Vincent explained. “If people could get over the language barrier, I feel like K-pop would be much more mainstream in the U.S. and other western culture because of the production value of the lyrics, music, dances, music videos…”

Vincent also commented on the issue of racism when it comes to K-pop and the music industry.

“If you listen to American or western radio shows and interviews talking about K-pop, there is a lot of xenophobic undertones. If people could open up their opinions of others, I think our music palate would be vast,” Vincent said.

Ballard shines a positive light on the language barrier concern.

“I think it’s interesting to [learn] Korean or other languages,” Ballard said. “I believe many other people who listen to K-pop are learning Korean… and artists like BTS are using both English and Korean words in their songs.”

BTS said it themselves in an interview with NDTV: “there is no language barrier when it comes to music… music is a medium that connects people… even though they don’t speak the language.”

With their diverse range of musical styles and intense fan loyalty, K-pop groups continue to grow in popularity all over the world. K-pop artists have already made their mark on the American music industry and will likely continue to impact the pop scene for years to come.