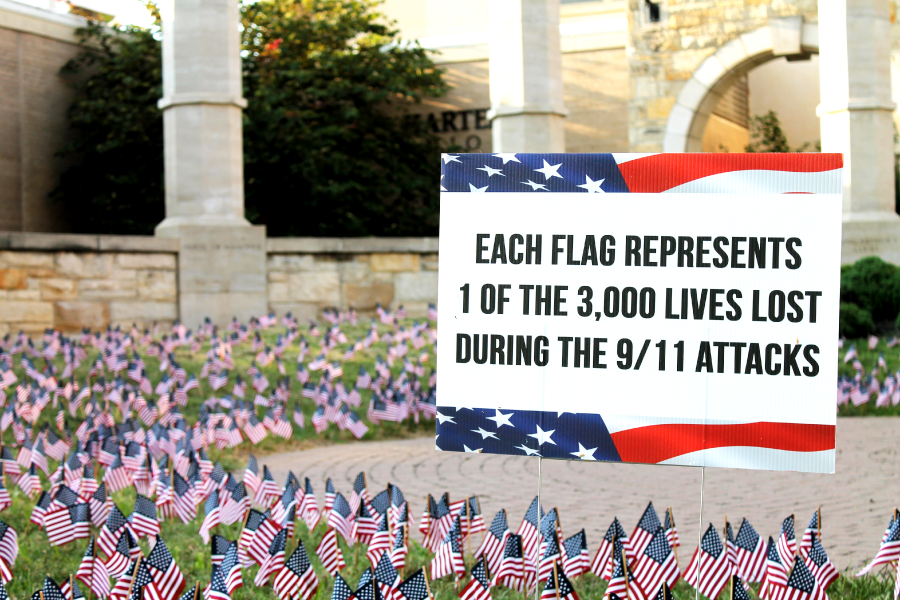 On Sept. 11, 2001, the United States stood still. As citizens went about their normal schedules of dropping their children off at school, driving to work and enjoying their days, little could prepare them for what would happen. At 8:46 a.m., American Airlines Flight 11 crashed into the side of the World Trade Center’s North Tower in Lower Manhattan.

Fear and confusion seized New York City and the rest of the country. Though initially many assumed it to be a tragic accident, terror struck again when United Airlines Flight 175 flew into the South Tower, eighteen minutes after the first plane struck. This potential accident soon became a national emergency. News channels from every corner of the nation were following these events and Americans became glued to their television screens.

Twenty years later, the U.S. continues to heal the wounds as a result of the attack. Significant changes in identity and media have occurred.

After the towers fell, another hijacked aircraft was flown into the Pentagon and the passengers of Flight 93 rose up against the hijackers, resulting in the Boeing 757 crashing in rural Pennsylvania.

Time stood still for the U.S., its citizens frozen in the wake of tragedy.

Assistant Professor of Mass Media Tasha Riggins vividly remembers her experience the day the attack happened. Riggins, who was a freshman in college at the time, was notified by a school janitor to turn on her television.

Riggins watched as both planes hit the towers one after the other.

“Me and this janitor, who I have never met, are sitting on my dorm room floor, crying,” Riggins said. “I remember thinking, what does this all mean?”

Like Riggins, many Americans struggled to cope with the trauma of the attack. Rand Corporation research states that over 80 percent of Americans coped with 9/11 by turning to prayer and other spiritual outlets. Others coped by avoiding the news and television as a whole.

Over the years, numerous memorials have been designed and dedicated to the 2,977 lives lost during the attacks. One of the most popular memorials is located at the foundation of the Twin Towers in New York City, otherwise known as Ground Zero. Each year, thousands of Americans visit these memorials, paying their respects to fallen friends and family.

When the terrorist organization Al-Qaeda was identified, patriotism became a predominant national sense of identity. The attacks on 9/11 led to the War on Terror with Afghanistan and Iraq. Many Americans supported former President George W. Bush sending troops overseas, and congress approved the expanded use of military force, extending the executive branch’s authority to wage war. On a cultural level, popular music began to include more pointed patriotic overtones. Lee Greenwood’s “God Bless the USA” was a common favorite, the lyrics centered on the pride and joy of being a “true” American.

Dean of Students Cassy Bailey reflected on how the aftermath of the attacks resulted in a “great amount of patriotism” and “the energy of being one nation.”

The rise of patriotism in America left minority populations on the fringes, as xenophobia and islamophobia spread across U.S. soil. Muslim-Americans were racially profiled due to feelings of anxiety, suspicion and fear, and assumed to be affiliated with terrorist organizations, leaving them to face discrimination for several years and decades after the attack.

Data research done by TheWorld shows that in 2001, the number of anti-Muslim hate crime cases skyrocketed from 28 incidents to 481. This data also shows that the level of hate crimes against Muslims decreased in the following years, however, the numbers never returned to levels reported prior to 9/11.

Today, national security in the U.S. emphasizes efforts to ensure the safety of citizens post 9/11. Before the attack, airport security existed as a simple process. The luxury of arriving at the airport 30 minutes before departure soon faded from the memories of U.S. citizens.

Aviation security and restrictions of certain items, including powders and liquids, aboard an airplane, were put in place. Just two months after 9/11, The Transportation Security Administration (TSA) was created. This administration set specific rules and regulations pertaining to what one can and cannot travel with on an airline.

The Department of Homeland Security was created in response to the attacks. This agency works to ensure the safety of America in all aspects, from emergency response to cybersecurity and border security.

At the time, every network news station wanted footage of the attack to spread awareness of what was going on. Journalists and producers rushed to gain access to any live coverage or information of the towers falling, leading to the 24-hour news cycle we see today.

Reactive reporting of the attacks sent in a wave of viewers to American news channels. On the night of September 11, Neilson Tv Ratings estimated at least 80 million Americans watched the evening news.

Dozens of videos of the Twin Towers were broadcasted on all news platforms. However, issues began to rise after footage of the attack on the Pentagon was released five years after the towers fell. Suspicions were raised as to why these images were not shared, and why it took so long to publish.

Chair of Department of Mass Media and Visual Arts Joe Watson expressed how 9/11 has left the U.S. vulnerable to distrust between America and its media. One of the main issues would be conspiracy theories. BBC News states that the first conspiracies regarding 9/11 were uploaded to the internet just hours after the attack.

Because of the rise of the internet and social media platforms, these same conspiracies developed a large scale of attention. For example, the online claim that jet fuel from an airplane cannot melt Steel beams implies that the World Trade Center was destroyed by a number of explosives.

While Watson agreed that the media makes efforts to pay respects to the anniversary of 9/11, he said, “the internet has not been helpful. There are so many conspiracies and there are so many alternative explanations.”

Watson, who lived in Cleveland, Ohio at the time, was also notified the city was being targeted by another plane.

“We were told there was a plane headed towards Cleveland. Our local television and radio were saying this,” Watson said. He remembers the fear and uncertainty he and the rest of his colleagues felt during these announcements. Ultimately, United Airlines Flight 93 crashed in Pennsylvania and turned around over the city of Cleveland.

For those who were there, sharing their experience with 9/11 and its impact comes with a wide range of detail.  Many stories are full of vivid images and conversations, and some witnesses even remember the clothes they wore that day.

Generation Z or those who were born between 1997 and 2001 were too young to remember the details of 9/11. This generation, however, was left to live through the aftermath. Generation Z’s access to the details of September 11 comes from statistics and resources in American media, social sites and from learning in history class.

Junior Gennavieve Guerrera, a member of Generation Z, is one of many young adults that have felt the impact of 9/11.”After 9/11, everything in America changed,” Guerrera said. “The norm for us is completely different from the norms of our parents’ generation.”

Guerrera also touched on the issue with false claims about Middle Easterners. “I’d say one of the biggest ways we are affected by 9/11 is the false sense of fear associated with Middle Eastern people that society tries to instill in us. It’s unjust, but it’s what our generation was taught,” Guerrera said.

The effects of 9/11 also altered the American schooling system. School safety post 9/11 established a newer, secure method for how students conducted themselves in case of an emergency.

Today, K-12 schools in the U.S. receive alerts from the Homeland Security Task Force whenever a potential threat is being made. Students are also subject to intruder drills, to practice how to behave if someone were to breach school grounds. After 9/11, school security guards and police receive first responder training and are also required to practice intruder drills.

After 9/11, the U.S. made changes in home security and self-identity. Americans started from the ground up in their healing process, coping with one another through song, prayer and congregation. Today, Americans continue to heal by coming together each year in solidarity to remember September 11.