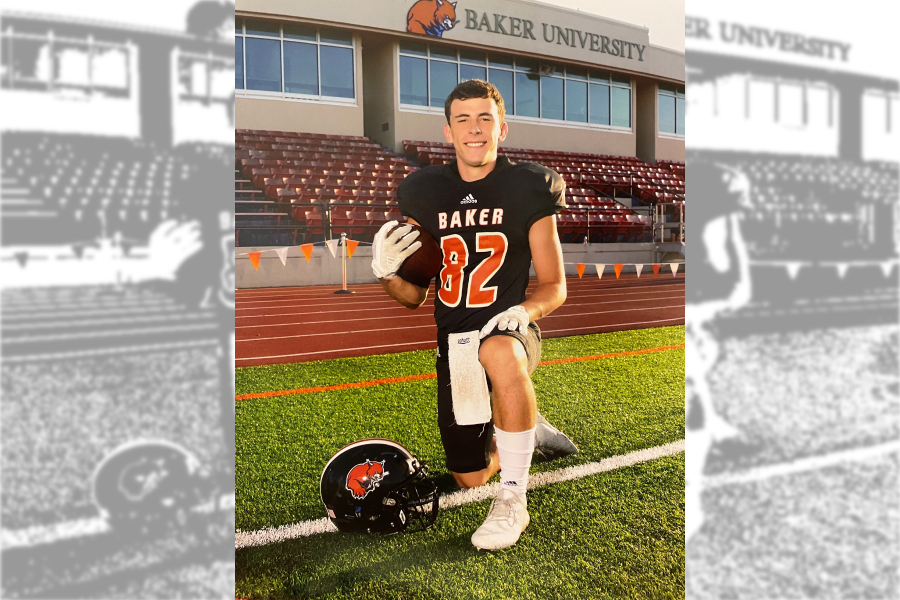 Former Baker student Caleb Addington 21, died on Aug. 12. He is remembered for his eagerness to help others and his dedication to his friends and family.

Former Baker University student Caleb Addington, 21, died on Aug. 12, leaving a void in the lives of everyone who cherished his bright spirit. Family, friends, the Baker community and all those who loved him have been deeply affected.

Caleb was driving his motorcycle westbound on Interstate 435 near State Line Road when he was involved in a car accident. At approximately 9:19 p.m. on Aug. 11, a vehicle ahead lost control and crashed into the center medium. Just moments later, Addington crashed into the stopped car.

According to Porter Funeral Home, Caleb died later that night at Overland Park Regional Medical Center. The driver of the disabled vehicle walked away with minor injuries.

Losing Caleb was heart-wrenching for those who knew him.

Caleb’s family saw him as a genuine, loving human being who lived his life to the fullest. To his family, his personality was the perfect balance of fun, laughter and seriousness, with him being able to find a positive outlook on any situation.

He was always eager to help anyone in need, and he was dedicated to his family and friends.

Caleb had developed an interest in motorcycles and took multiple rider safety classes. In May of 2021, he purchased his first motorcycle.

“He was so proud to make his first adult purchase all on his own,” Caleb’s mother Jeanette Addington said.

He thrived in football throughout his childhood and adolescent years. His talent and grit earned him a scholarship to play at Baker. Ms. Addington recalls the campus visit she and Caleb attended with the football coaches before he committed to Baker.

“It was during this visit that Caleb felt the ‘Baker Magic’,” Ms. Addington said.

Being a Baker alumna herself, attending the Baldwin City campus in the late 80s and graduating from the School of Nursing in 2006, Ms. Addington personally experienced this “magic”.

“Seeing him light up during that visit and talking on the way home was one of the best days of my life,” she said. “He had decided that Baker was the place for him.”

And so, he made the transition from Lenexa, Kan. to Baldwin City, Kan. to begin his college journey.

Caleb attended Baker for his freshman and sophomore years. On-campus, he was a member of the football team and the Delta Tau Delta fraternity.

After those two years, Caleb decided to leave Baker, but the friendships he made would continue to flourish.

Senior Parker Guffey was both a football teammate and fraternity brother of Caleb’s. He describes Caleb as a “goober” because of how funny and energetic he was. Guffey also valued Caleb’s willingness to drop everything to help his friends.

“This kid was something special. He brought great energy wherever he was,” Guffey said. “He was everything you could ask for in a teammate and fraternity brother.”

Senior B.J. Harvey had known Caleb since their freshman year of high school. They were basketball and football teammates and continued that friendship into college. The pair even went on their visit to Baker together.

“[Caleb] was always accountable and honest, which are two of his traits that I most admired,” Harvey said. “The best thing I can do now is honor his life and remember all the good times that we had together.”

According to Ms. Addington, Caleb left Baker after his sophomore year to pursue career aspirations. Initially, he was interested in going into law enforcement, but he discovered his niche elsewhere.

Caleb began working at Gail’s Powersports in Grandview, MO as the Lead Parts Specialist. He became passionate about his job and loved going to work every day. His coworkers became like family to him.

The owner of Gail’s Powersports said he was “going places” at her business. Since his passing, the owner has hired Caleb’s brother Mark Addington to fill his job.

“Mark is anxious to make Caleb proud and to continue the work he started,” Ms. Addington said.

Though life has been a blur since they lost Caleb, his family appreciates the flood of support coming from the Baker community.

Life will never be the same without him, but Ms. Addington is finding comfort in her belief that, “God had a plan for Caleb and he was needed for another job.”

Caleb spent his 21 years of life selflessly, and he will not be forgotten.

“It amazes us every day at how many lives he touched and what an impact he left on so many people,” Ms. Addington said. “I do not believe that he even knew what an incredible person he was.”