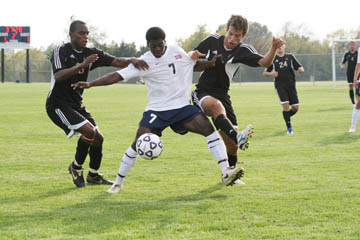 Seven goals were scored, six in the first half, as nationally No. 13-ranked Benedictine College defeated Baker men’s soccer team 4-3 Friday in Atchison.

Baker is 7-4-2 on the season and 3-2 in Heart of America Athletic Conference play. The Wildcats also are receiving votes for the National Association of Intercollegiate Athletics Top 25 Coaches’ Poll.

“The start of the game we came out hard and ready to play,” junior Matt Abbott said. “Our intensity was great. We just need to continue that intensity the whole game.”

Baker jumped out to an early two-goal lead in the first 10 minutes. Senior Gerard Grehan scored the first goal of the game for the Wildcats. Abbott followed with a second goal to give Baker the 2-0 lead.

“That was definitely good to see,” senior Aaron Williams said of the early goals.

Junior Kome Okiomah said scoring the two early goals was a testimony to the team’s hard work in practice.

Benedictine then scored two goals and tied the match in the 29th minute. Both teams received a red card in the first half, senior Jon Baldwin was given the red card for Baker, so each team played the rest of the game with 10 men. Both teams scored in the minutes before halftime to make it 3-3.

Benedictine junior Keith Parkhurst scored the winning goal for the Ravens in the 77th minute.

Williams said the Wildcats will finish first in the conference if they win their final games of the season.

“We’re still very much in the driver’s seat,” Okiomah said.

Baker will face Central Methodist University at 7:30 p.m. Saturday at Liston Stadium. This is the final home game of the season.