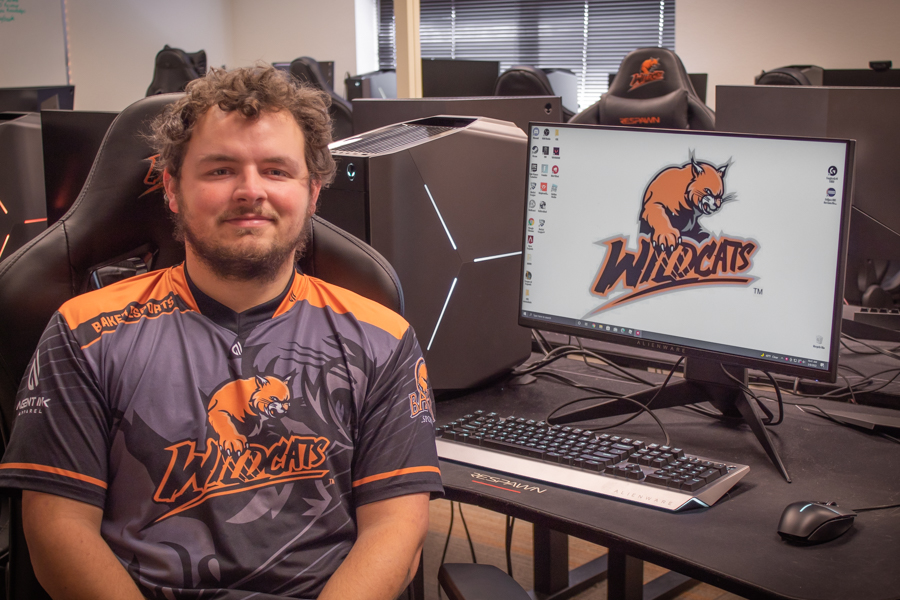 Recent Baker alum and former member of the esports team, Justin Toumberlin, becomes interim Head Coach for esports until the position is filled.

Toumberlin was approached by Athletic Director Nate Houser and Assistant Coach Jessica Elam to fill the vacancy left by former head coach Toby Ebel, who departed Baker in Fall 2021, while a national search for a permanent head coach is ongoing.

With the esports team being created in 2019, Toumberlin spent one year on the team himself and continued to help out the team this past year. He helped the team by shout-casting, also known as commentating, for both the Rocket League and Valorant streams. Being back at Baker University as a coach instead of a student has brought up a lot of emotions for Toumberlin.

“I had a lot of good memories here, a lot of people are still here that I know, since I graduated so recently. So I’m rekindling some friendships,” Toumberlin said.

Toumberlin has been playing video games for as long as he can remember and considers himself well versed in the gaming world. He plays “Valorant”, “Rocket League”, “Overwatch”, “Rainbow Siege”, all of which are games that the team competes in. Outside of competition games, in his free time Toumberlin plays “Escape from Tarkov” as well.

“I started on the OG Playstation and I’ve always gone up through the consoles,” Toumberlin said.

Even though Toumberlin has only been head coach for a short time, he still has encountered some struggles. This includes scheduling issues due to everyone’s different involvement on campus as well as trying to stay as professional as possible with the athletes.

“[Some students] realize I’m pretty close to their age, and kind of want to be buddy buddy, but at the same time I am the coach and there are rules that need to be followed,” Toumberlin said.

As head coach, Toumberlin spends his days needing to stay up to date with all the games the team plays as well as continuing to play alongside them.

“[I] maybe play some games, because I do have to stay up with the meta and all the games and stay familiar with them. Play with some of the people that are in here if they’re in here,” Toumberlin said.

Freshman Grace Boyer is a member of the “Overwatch” team and is grateful for what Toumberlin brings to them.

“He was on the team and he has a good grasp on everything. Like, he’s in there always everyday, gets up. He keeps up with video games too, and is able to sub whenever we need someone or someone isn’t there. I think it’s extremely beneficial towards us,” Boyer said.

Boyer also appreciates how Toumberlin actively coaches the team and takes an interest in each team member.

Most of the team’s competitions start after 5:30 p.m. and Toumberlin is in charge of getting the stream set up for audience members to watch the game. During the season, athletes play Monday through Friday and the live stream can be found on Twitch. Toumberlin also will walk around the arena during competitions or even enter the game and watch his team as a spectator.

Like any other sport, Toumberlin has a playbook for the athletes to use during their games.

“Every game has a strategy and we can definitely manipulate things. Before each game I try to find the ranks of the other team so we can do different things based on their ranks,” Toumberlin said.

With the start of the season gearing up, Toumberlin is looking to the future and hoping to end with a winning season.

“I’m just excited to find some more success. I know that this team is really young; there is a handful of seniors but there are a lot of freshmen. [In] my first year, we found some tremendous success and I didn’t think we were going to,” Toumberlin said. “I just want to be able to find some similar success with the group that we have now, and potentially grow to be a really well-known team.”

The Esports team will begin nine weeks of league play in the National Esports Collegiate Conference (NECC), and then continue into the playoffs depending on the team’s record at the end of the regular season.