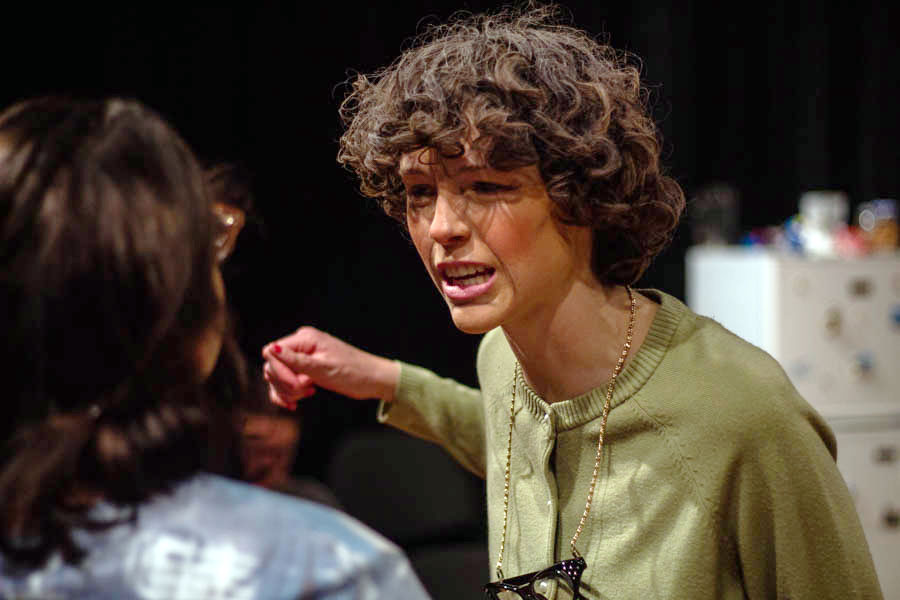 Junior Sami Aceto, playing the role of the mother Thelma, chastises her daughter. The play featured two casts, exhibiting the ways in which males and females confront mental health and suicide differently.

Within a matter of weeks, Baker University will graduate its last two theater majors: Seniors Kenzie Kuhlmann and Barry Baker. For their capstone project, the two chose to produce “’Night, Mother” as their final farewell to the theatre department.

“‘Night, Mother,” written by Marsha Norman for Broadway in the early 1980s, tells the story of a suicidal woman, Jessie, and the complex relationship with her mother, Thelma. Jessie discusses her intentions to take her own life and the two examine all that contributed to her lost sense of hope.

Kuhlmann, the show’s director, first read “‘Night, Mother” during her sophomore year and connected with the production after the passing of her relative.

“It’s been very rewarding to put together something so personal and real to life,” Kuhlmann said. “I want the audience to take away that you never know how someone is feeling or what they’re going through. You never know how much of an impact you have on someone.”

Every aspect of the production was integral to its message of hopelessness and suicide. Though the original script was written for two female characters, Kuhlmann and Baker developed an additional cast with a male lead played by Senior Gabe del Valle. They double-cast the show in hopes of demonstrating the differences in the signs of depression and suicide between males and females.

Del Valle devoted his time to researching these differences to integrate subtle details into his performance.

“I engulfed myself in learning traits of depression and suicide,” del Valle said. “I tried to challenge myself and put myself in a very different set of shoes.”

He explains that behaviors like rubbing his head to demonstrate headaches and his character’s patterns of overeating showcase common symptoms of depression among males.

Behind the scenes, Baker worked hard as the lighting designer to bring the show to life. Hoping to find a long-term in-house lighting job in the future, he was intentional about creating a show with significance.

“Since this show is so heavy, I knew I wanted to have the lights dimmer and give this cold feeling to the show,” Baker said.

Baker explains that the message of the production is an important one.

“I was honored when Kenzie asked me to light design for her and help her bring her creativity to life,” Baker said. “I am honored to be able to help bring this message across.”

Del Valle agrees that “‘Night, Mother” is unlike any show he’s done in the past.

“It’s very different from your happy ending production where everyone gets what they need,” del Valle said. “I’ve done some other productions and some other plays but nothing that’s been up to the magnitude of ‘Night, Mother.’”

For these outgoing seniors, leaving behind the theatre department is a bittersweet moment. This project marks the last collaboration for the theatre students at Baker.

“While the ending wasn’t what I was expecting, I will always miss the people I collaborated with,” Baker said. “I met so many amazing people in my five years in the department, and several lifelong friends.”

Email [email protected] and include name, number of people attending, and which performance you will attend to make your reservation.