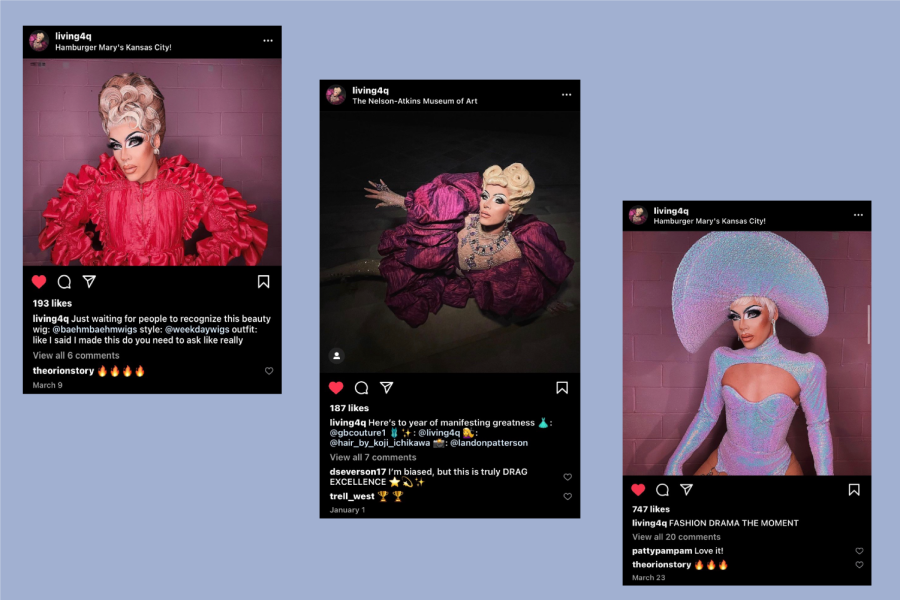 Professional Drag Queen, Q, will make her Baker University debut on April 27 in Rice Auditorium. Q will serve as the host for the evening and will be joined by three other drag queens.

On Wednesday, April 27, Baker will be hosting a drag show, courtesy of the Total Equality Alliance (TEA). For the first time, the drag show will feature performances from four professional drag queens.

Drag shows are live performances featuring lip-syncing to songs, comedy, dance routines and more. The main draw, however, is that they are all performed by “drag artists.” While drag artists can be any person of any gender identity, “drag queens” are the most common. Drag queens are men who dress up and perform as women, traditionally with lots of emphasis on exaggerating feminine features.

Since 2018, TEA has hosted four drag shows during the month of April, or “Gaypril” as it has been referred to in the past. Traditionally, the shows have been performed exclusively by Baker students and typically by TEA members. But the fifth annual Baker drag show will feature four professional drag queens Q, Mulan, Cynthia Doll and Lana Luxx.

According to Sophomore Emma Elder, who serves as TEA’s public relations chair, the idea initially came about because TEA’s president, Senior Kenzie Kuhlmann is friends with Q and was able to make initial contact with her.

“While we loved the [drag shows] with students, there is no drag show like one with professional queens,” Elder said. “We thought it would greaten the experience at Baker to have real queens.”

“We don’t have any specific criteria that we like have to have,” Senior Kinley Grubb, Public Relations Executive for the Student Senate, said. “It’s just like ‘do we think this will be a great experience for Baker students, do we think it’ll be beneficial for Baker students, is this something that we wanna go to ourselves?’”

Sophomore Jackson Stopple, who serves as the Student Senate’s Treasurer, says that the decision was also influenced by the proposal’s uniqueness.

“When I saw [TEA’s proposal], I said ‘oh that’s kind of interesting!’” Stopple said. “It’s a different thing and it’s going to be especially different since we’re going to be doing it with actual queens.”

But the goal of the drag show is not solely for student entertainment. Drag performances have long been a part of the LGBTQIA+ community’s history and its own form of art. The hope is that hosting a drag show at Baker will help introduce students to a new culture and ideas they have not been exposed to before.

“I have never seen a drag show, I’ve only ever heard about it and seen it on social media, but I’ve never been lucky enough to experience it,” Grubb said. “I think the fact that we’re able to bring something like that to Baker just expands our horizons as an environment and gives people new things to think about and talk about and a whole new culture to experience.”

However, like any performance, there is some general etiquette that should be observed for those looking to attend the drag performance. For example, audience engagement is often expected to help keep the energy alive but it’s inappropriate to touch the performers without permission. It’s also customary to give out tips.

“I would just encourage them to give it a try and if they feel uncomfortable, they are not obligated to stay but it never hurts to try a new experience,” Elder said. “Please come to the drag show and bring cash tips! We are very excited to be hosting this event.”

The drag show will begin at 7:30 p.m. this Wednesday in Rice Auditorium.