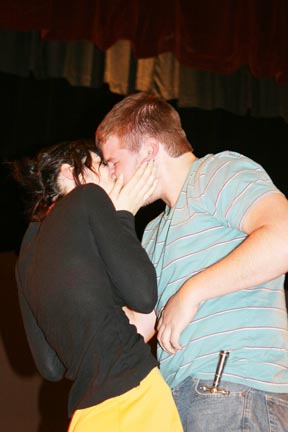 Shakespeare’s great tragedy “Macbeth” is scheduled to open Thursday, Nov. 6, at 7:30 p.m. and continues through Sunday, Nov. 9. in Rice Auditorium.

“Macbeth’s” large cast has a good mix of returning talent and new cast members who have never before been in a play,” Adjunct Instructor of Theater Rachel Roberts, who is the director of “Macbeth,” said. “I love Shakespeare, and I thought this would be a good opportunity to bring one of his plays to Baker, I especially love this show in particular and how it perfectly shows what absolute power can do to a person and even morality.”

Roberts said the theme of the play works with this time of year.

“It is good with the timing of the season being around Halloween and even the election showing what happens when corruption and power come together.”

Written in the 1600s, the play follows its main character Macbeth and its remaining characters as they are faced with deception, fate, ambition and death.

Macbeth represents every man, Roberts said. He is not evil, not a dictator but just a human who makes one bad choice. After this he has to continually cover up that lie until he finally has to face the consequences.

“People can expect to see a lot of people doing their best on stage,” freshman Tyler Falk said.

“Macbeth,” being one of Shakespeare’s darker plays, has many intense moments with a lot of action.

Falk, who plays Duncan and Siward, said his favorite scenes from the play are the fight scenes – especially the final sword fight between Macbeth and MacDuff.

Roberts had outside help in choreographing the numerous sword fight scenes within the show, she said.

Having more time with this show than most to prepare his character of Macbeth, junior Bob Linebarger said he was able to make the character more structured.

“The hardest part about doing this show is it is Shakespeare and the fact the language is not in our time nor is it normal, and we had to do combat training,” Linebarger said. “Also, this is one of Shakespeare’s greatest tragedies and that is a big thing to have to live up to.”