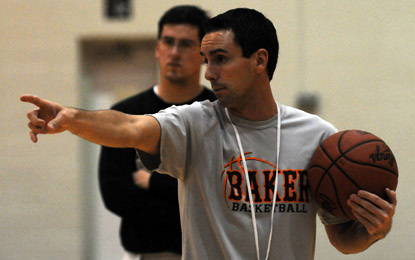 Alumnus Aaron Toren returned to the court to play with some of his former teammates and said the experience was a lot of fun.

“It brings back a lot of memories,” Toren said. “We get to play with guys that we played with and then with some older guys.”

“Sometimes you have some déjà vu,” he said. “It’s pretty cool to play against guys I played with in my early years and guys who played before us.”

Also in attendance was former head men’s basketball coach Rick Weaver, who stepped down prior to this season after 25 seasons at the helm for the Wildcats.

Weaver misses the daily contact with his players but says he still enjoys seeing his former players.

“The best thing has always been keeping track of kids after their graduation,” Weaver said.

Weaver said it is also great to see the former players renewing their friendships, and it is good for the current players to meet those who played for Baker in the past.

“There is a good tradition here,” Ballard said. “And, this shows that this place is a lot bigger than just our team.”

The scrimmage began with the current Wildcats scoring first, but the alumni fought back, taking a 12-10 lead at the 10:44 mark.

The current Wildcats increased the pressure on the defensive end, allowing them to tie the score at the first break 21-21.

Senior Jaris Wommack hit a 3-point shot to give the Wildcats a lead to start the second session. However, the alumni answered, eventually taking a 30-29 advantage.

With 9:10 to go in the second session, senior Austin Bond hit a 3-point shot to give the Wildcats a lead in which they would never let go.

The Wildcats outscored the alumni 16-6 in the final session, led by two 3-pointers from Bond.  The final score of the scrimmage was 60-41 in favor of the current Wildcats. The team was lead by Wommack’s 13 points, on 4 for 6 shooting, followed by Bond’s 12.

Ballard said the team showed some good things during the scrimmage, but has a lot to work on, and said no coach is satisfied with a team at this point in the season.

Toren said the tradition of Baker basketball goes beyond that of the game itself, or wins and losses.

“It’s just special to be a part of a program where people come first,” Toren said.