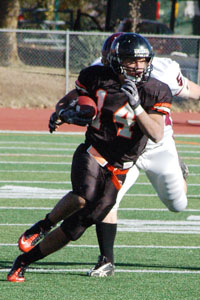 The Baker University football team found out Saturday, in its 20-14 win at No. 20 Benedictine College, what the atmosphere of homecoming can bring to a football game.

“It was their homecoming,” head coach Mike Grossner said. “They had a big crowd. I was upstairs (in the press box), so I was able to see that. It was standing room only. We took their crowd out of the game early and for the whole first half.”

The Wildcats will host Graceland University at 2 p.m. Saturday at Liston Stadium for Baker’s Homecoming game.

Graceland enters Saturday’s game on a four-game losing streak and is 1-6 on the season. Baker won last year’s matchup 44-7 in Lamoni, Iowa.

The Wildcats come into the game with a record of 3-4 and have won three out of their last four games. BU is looking to build off the win against Benedictine, in which the offense, defense and special teams had success.

The defense highlighted the game by forcing five turnovers and making a goal-line stand, with less than a minute remaining, to hold on to the victory.

Freshman Michael Stevenson had two interceptions and the Baker defense forced and recovered three fumbles.”We played pretty much lights out defense,” senior Kyle Weinmaster said. “We planned all week to stop the run the whole game.”

Junior John Babb led the offense, running for 146 yards and a touchdown.

The offense has relied upon Babb to take most of the carries, with freshman Scott Meyer out with a shoulder injury and freshman Aaron Terrill having his carries limited due to a minor leg injury.

“I’ve been ready since last season, ever since I was backing up Richie Bryant,” Babb said. “It wasn’t really a big deal because I thought I was going to be the guy coming into the season, but that ended up not being the case because I was a little banged up in camp.”

The special teams also were a big factor in Saturday’s win. Freshman Jared Morss kicked a 25-yard and a 46-yard field goal, which was his longest of the season. Junior Garrett Chumley punted 10 times for the game in which field position was a battle.

Grossner is hoping his team continues to play well in all three phases of the game and believes the team will have to eliminate any distractions of Homecoming on Saturday.

“With Homecoming, there are a couple of distractions,” Grossner said. “I’ve talked to the team about that, because Graceland is always very athletic. If we continue to do all of the little things well, we should be able to put on a good one for the crowd on Saturday.”