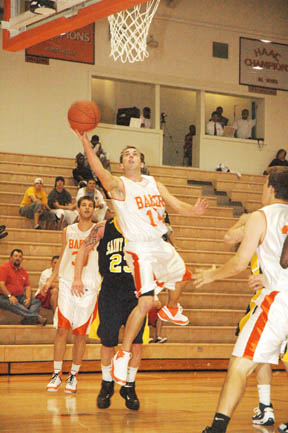 The Baker University men’s basketball team is set to begin its conference season against HAAC opponents after wrapping up its non-conference schedule with an exhibition game against Northwest Missouri State University Nov. 23 in Maryville, Mo.

The Wildcats lost the exhibition game to the Bearcats 87-63, but head coach Brett Ballard believes playing against tougher competition can help the team in preparation for conference play.

Senior Andre Strozier led the Wildcats against the Bearcats with 25 of the team’s 63 points in just 26 minutes of play.

Baker is also coming off a two-game spilt in the University of St. Mary Classic on Nov. 19 and 20 in Leavenworth.

The first of the two games for the Wildcats were against the tournament host University of St. Mary.

The ‘Cats defeated the Spires 72-67 to end a three-game losing streak. Strozier and senior Jaris Wommack led the team with 19 points each.

“I thought we showed what kind of team we are when we played St. Mary the first day of the tournament,” junior Joe Wachter said. “We came from behind in the game and it was a team effort.

Everybody contributed. There were some big baskets made.”

The second game of the tournament did not go nearly as well for Baker. After a 73-70 loss to Ottawa University Nov. 13 in Collins Center, the Wildcats lost to the Braves 81-56.

“We did not play well at all against Ottawa,” Ballard said. “We came out and missed a bunch of easy shots early in the game and then it kind of snowballed and they played well the second half.”

The Wildcats knew they had a number of things to work on before their first conference game against Benedictine College at 7:30 p.m. Thursday in Atchison.

The results of the matchup were not available at presstime.

“Our main focus right now is just sharpening everything up,” senior Austin Bond said. “We have our offensive and defensive schemes set in place. We just have to sharpen things up.”

The Wildcats are looking to improve from the 3-17 conference record last year and become more competitive with the other teams in the HAAC.