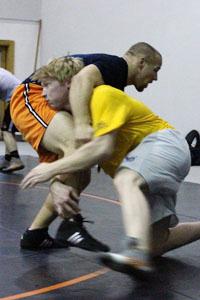 It has not taken long for the Baker University wrestling team to make an impact at the national level.

Baker finished 16th at the NAIA National Championships March 3-5 in Cedar Rapids, Iowa, after its second season as a program.

“I thought the team wrestled well,” sophomore Jarell Price said. “We had a lot of young guys on the team and they got to experience the big show for the first time, and a lot of them did well.”

Senior Levi Calhoun, heavyweight, and Price, 149 pounds, who placed fourth and seventh respectively, led the Wildcats. By placing eighth or higher in their weight classes, Calhoun and Price were designated with the honor of being named All-Americans.

“Levi Calhoun has been here for five years, and when I think of Baker University I think of Levi Calhoun,” head coach Jimmy May said. “He bleeds orange, and he’s accomplished quite a bit in the time he has been here on the wrestling mat and the football field. That is quite an accomplishment after just two years to place fourth in his weight class in the national tournament.”

“I am very thankful for my coaches, fans and all of the support I have received here,” Price said.

Price was pleased with the team’s performance this season, but is already looking forward to next year.

BU is returning everyone on the roster next year except Calhoun and senior Andrew Hurla. With all of the experience coming back next year, May is going to focus on recruiting quality wrestlers instead of a large class of recruits for next season.

While the ‘Cats were only able to take 12 wrestlers to the national tournament, the team qualified 26 wrestlers for the tournament and redshirted a number of athletes who could have potentially qualified.

“I expect that we will come back even more confident next year and do even more impressive things,” sophomore Parker Owen said.