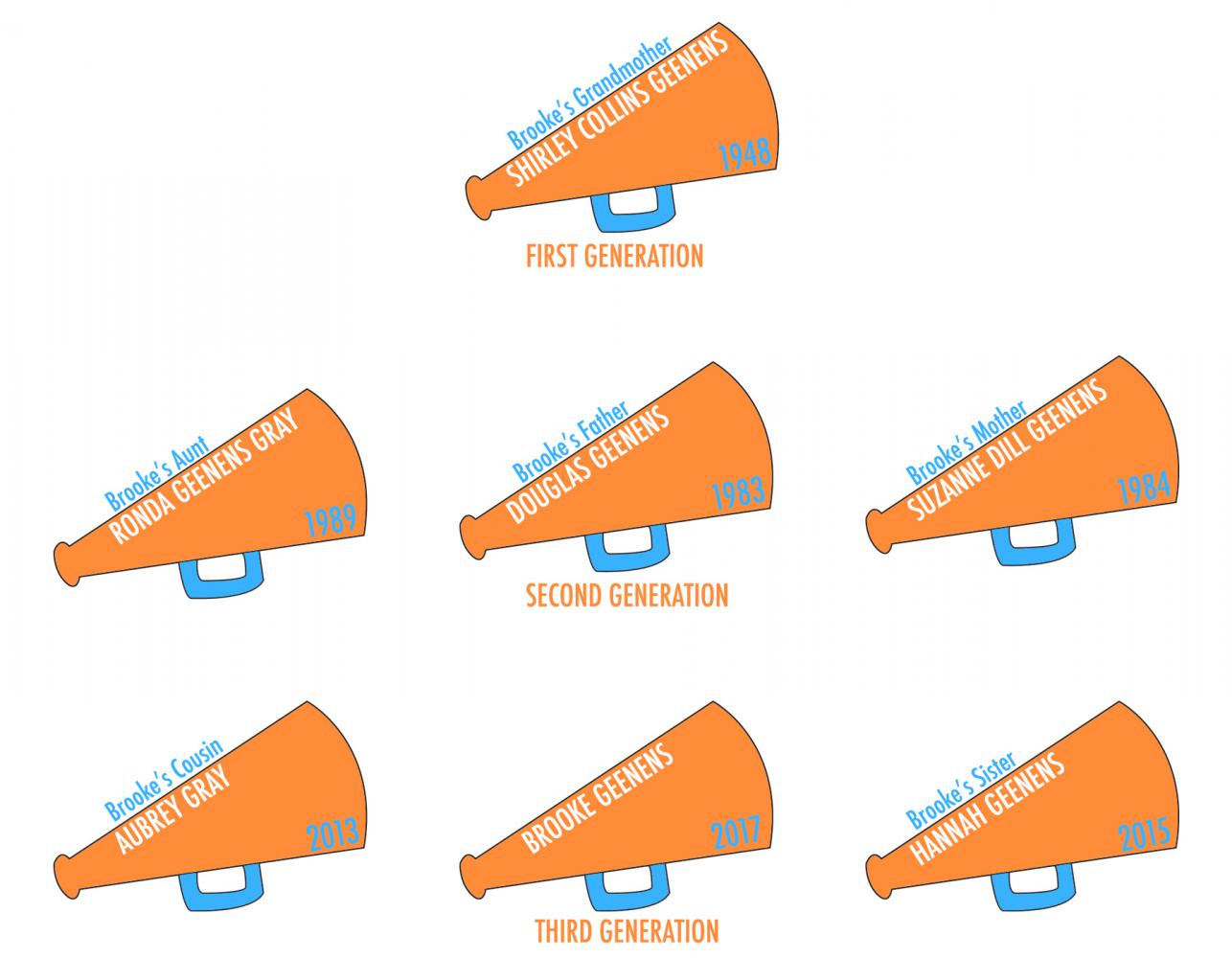 For Baker University, tradition is something taken very seriously. For Brooke Geenens and her family, Baker is a key factor in her own family’s tradition.

“All my friends would wear their cheer uniforms to school for like the little football teams,” Geenens said. “So I got into that cheer pretty soon because I was friends with everyone and really wanted to do that.”

After her first year in cheer, Brooke moved into a more competitive cheer team. However, it took some time convincing her mother to let her join.

“I like begged my mom for months to let me go do that and I’ve done it ever since then,” Geenens said.

With Brooke continuing both her education and passion for cheering to Baker, she became the seventh person in her family to be a Baker cheerleader. Brooke says she loves being able to have a large support system from her family members that have gone in the same path as her.

“It’s just awesome to have that connection and look back at pictures and say that I followed in the footsteps of my family because no one else can really say that, especially about cheerleading,” Geenens said.

Geenens remembers first becoming familiar with Baker cheer when her grandmother, on her father’s side, would repeat some of the cheers for her.

Both Brooke’s mother and father cheered at Baker, but for different reasons.

“My dad cheered, but he claims he did it to meet girls,” Geenens said. “My mom cheered as well, she was into gymnastics and cheerleading.”

Brooke’s cheer career as aligned the most with her sister Hannah’s, who graduated from Baker in 2015. Both Geenens cheered together early in their lives with competitive cheer, continuing to cheer together in both high school and college.

Hannah says Brooke played a role in getting her to start cheering.

“I started cheering when I was in the fourth grade,” Hannah said. “I actually played soccer for a long time and ended up wanting to cheer, because Brooke started cheering, so I kind of followed her footsteps there.”

Hannah enjoys being part of a large family of cheerleaders at Baker because there wasn’t only a constant outpouring of support during her time at Baker, but she also enjoys hearing and talking about the evolution of the sport with her family.

Since her time at Baker, Hannah still finds her favorite memories while with the Baker cheer team to include her sister.

“I think being on the team with Brooke was my favorite memory, just because I could boss her around,” Hannah said.

She was quick to add that she was kidding. Hannah thought that experiencing cheer at Baker with Brooke was so fun, because they were doing the same things their relatives had done before them.

With Brooke’s graduation from Baker comes bittersweet feelings. Brooke is currently the last Geenens family member to cheer for Baker taking the legacy with her as she leaves Baldwin City.

Brooke’s mother, Suzanne Dill Geenens, is happy to see her graduate from Baker, but will miss going back to watch her cheer.

“It’s kind of sad,” Suzanne said. “Because we’ve watched cheer now for six years and that’s been really fun, but I’m also really excited for her next step in life.”

Some of Suzanne’s favorite memories from Baker include having her close friends be on the cheer team with her and having good yell leaders on the team.

Brooke’s mother Suzanne Dill posing in the Baker yearbook with the cheer team. Dill is fourth from the left in the front row. Photo courtesy Baker Yearbook

During her time at Baker, Suzanne even had some love interests that gave her other reasons to come to games besides to cheer.

“I did date the quarterback of the football team and that always did make it more fun to cheer,” Suzanne said.

Brooke’s mother wasn’t always set on Baker like her daughters. Suzanne’s father had her enroll in summer school classes at Baker to give her a taste of Baldwin City. Suzanne’s mother was going back to school the summer before she started so the family lives in their airstream in Baldwin City and Suzanne took summer classes at Baker, including a tennis class with her mom.

“I got about half a semester through the summer and you just fall in love with Baker…the people and the campus,” Suzanne said.

As Brooke arrives at her last week at Baker University she reflects on her time on the team and her hopes for the future of her family at Baker.

“Cheerleading, I’ve done it for so long that it was hard to kind of finish it out and be done with it,” Geenens said. “But I really wanted to leave this team in a good place and hopefully keep it as a program for years to come so that I can have more family come here at some point.”