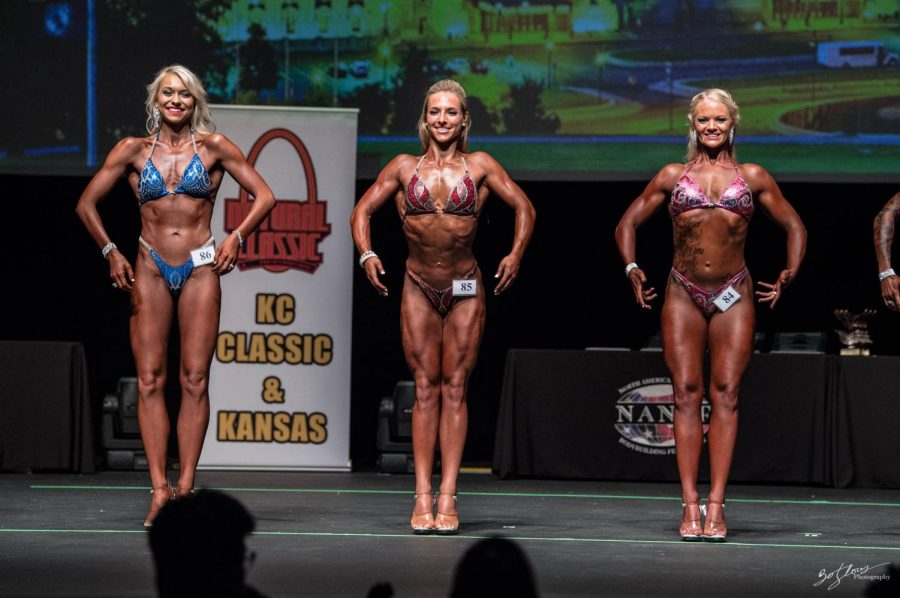 Swickard (middle) stands on stage displaying her figure to the judges and crowd.

Female bodybuilding: A serious sport that is sometimes overshadowed by male bodybuilding, but sophomore Riley Swickard decided to take on this obscure world. Swickard began a fitness journey in 2015 that would lead her to perform in a bodybuilding show, find a passion for health and fitness, and to a create an Instagram account aimed at inspiring others to share her lifestyle.

Swickard began by changing the foods she consumed. She started a ketogenic or “keto” style diet, which focuses on high fat intake and a low number of carbs consumed. Along with the new diet, Swickard started to lift weights and do more cardio.

“That was so much fun to me,” Swickard said. “I had so much energy so I was like, I want to keep doing this.”

Through that process, she lost almost 30 pounds. As she began this lifestyle change, she realized that her personal health and fitness were extremely important to her, especially as a student-athlete. Swickard plays outfield for the Baker softball team.

She decided it was time to focus on her body’s strength, which included a new nutritional plan with higher carbs. During this time Swickard started to become more toned and lean, especially as the softball season progressed. She started lifting more seriously, which quickly became a new form of stress relief.

“I could just go in, put in my headphones and lift,” Swickard said. “It sounds super cliche and cheesy but it is true. Everybody has their thing.”

JOURNEY TO THE STAGE

After spending two years with a personal trainer, Swickard was encouraged to try bodybuilding.

“I thought [about] the bikinis and the stupid posing I was like, ‘Oh wow, that sounds kind of corny, not really my style,’” Swickard said not knowing this would soon be a major part of her life.

Trainers Dawn Clifford and Janna Teefey told her she wouldn’t have to do much more work because of how fit she already was.

“She could have walked on stage after her first season of softball,” Clifford said.

Teefey first noticed Swickard in a group workout class that she was coaching. Swickard’s “beautiful muscle mass” stood out to her from across the gym.

“Just some people you know that have the elegance, the sassiness and the stage presence,” Teefey said. “I just have an eye for that.”

The last thing standing in her way was the cost, but the gym offered to purchase the swimsuit necessary for competition, a $400 to $500 investment.

After deciding to seriously compete in bodybuilding, the real work in training and meal prepping began, which was no small feat. The week before the show, Swickard was eating every three hours was always cold due to only having six percent body fat and being extremely fatigued.

On show day, she was nervous and a little uneasy. The culture of bodybuilding is very distinct and was not something Swickard loved about the sport. After getting her spray tan, gluing her swimsuit on with carpet glue and receiving compliments about her lats from strangers, Swickard was ready to take the stage.

In her first time on stage, Swickard was named “2017 Ms. Kansas Figure” and “Overall Novice Figure.” She hopes to compete again in the summer, the only thing in her way is the cost.

The transformation Swickard’s body went through was extremely fascinating for her.

Swickard said it was strange to have people look at her body in the way each judge does, however, at this point in her training she was used to displaying her body in that manner. Judges will have competitors switch around in the line up so they can be compared, all while people are yelling out from the audience at the competitors on stage.

The pictures captured of her final physique where so intense that friends and family thought her face was photoshopped onto someone else’s body. She waited a full week to post any photos from the event due to her fear of people’s reactions,

especially because most people didn’t even know she was competing in bodybuilding.

After the show was complete, Swickard began to check-off restaurants she wanted to go to on her list and would document her experiences on her social media, specifically Instagram and Snapchat. She started receiving questions about fitness, health and nutrition, so after a little convincing from friends she created a food and fitness Instagram page,

@youarewelcomeeats. The name, inspired by the messages she received, serves as a way for her to say “you are welcome” to her friends and followers.

The goal of her page is not to become internet famous, but to share the truth about health, food and eating well and to build her portfolio. Swickard is a mass media major on the public relations track.

“I hope that it educates and inspires people to care about their health more,” Swickard said.

Now that Swickard is back on campus, living in the Zeta Tau Alpha sorority house, cooking her own meals has come with a series of trial and error. With no real kitchen at her disposal, she has learned to cook her meals differently than she did at home.

“I honestly just used a lot of YouTube tutorials to see how I could manage and put my own twist on things according to the utilities and utensils that I have,” Swickard said.

While Swickard has fostered self-control, she tries not to restrict herself if she really craves something. She doesn’t want to become a “robot,” and tries to share that with her followers. Swickard hopes to continue her Instagram page and live her healthy lifestyle. In the summer, she plans on strengthening the page in her free time and to create a blog without the distractions of school and athletics.